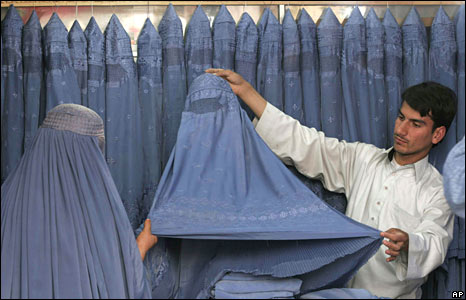 Islam-O-grab bag salesman:
Nothing ‘perky’ will show through this
And then there are those who insist that “moderate” Islamists actually exist, and should be negotiated with! What a deal for those Islamists who insist on only whipping and beating their women, and keeping them bagged up. They’re much much better than the ones who take things too far, like checking for non-Islamic bras. KGS
MOGADISHU, 17 October 2009 (Somalilandpress) – Somalia’s hardline Islamist group al Shabaab has publicly whipped women for wearing bras they say violate Islam by constituting a deception, north Mogadishu residents said Friday.
The insurgent group, which seeks to impose a strict form of sharia Islamic law throughout Somalia, amputated a foot and a hand each from two young men accused of robbery earlier this month. They have also banned movies, musical ringtones, dancing at wedding ceremonies and playing or watching soccer.
Residents said gunmen had been rounding up any woman seen with a firm bust and then had them publicly whipped by masked men. The women were then told to remove their bras and shake their breasts.
“Al shabaab forced us to wear their type of veil and now they order us to shake our breasts,” a resident, Halima, told Reuters, adding that her daughters had been whipped Thursday.
“They first banned the former veil and introduced a hard fabric which stands stiffly on women’s chests. They are now saying that breasts should be firm naturally, or just flat.”
Officials of Al Shabaab, which Washington says is al Qaeda’s proxy in the failed Horn of Africa state, declined to comment.