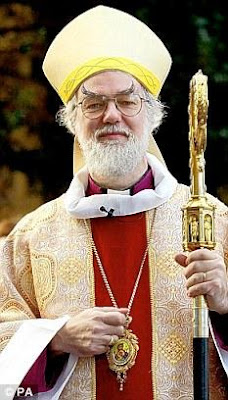 Rowan Williams:
Oh and I’m a strong believer
in man made global warming too!

The Tundra Tabloids returns to a familiar theme, religious blowhards who are a detriment to both the individual and to society at large. Contrary to popular belief, socialism is indeed a religious dogma, to become a member one must be willing to toss out logic, reason and reality and… just believe for the sake of believing. So it shouldn’t come as a surprise when members and/or leaders of established religion profess their faith in the failed teachings of Marxism. It’s not really that much of wide chasm for them to leap.