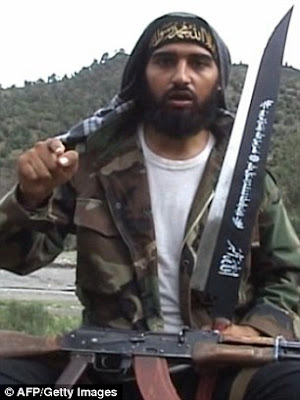 Abu Askar:
I’m doing what my prophet has written and expects
Obama’s Nobel Peace Prize has just served to increase their growing confidence. The Europeans are trying to reward and tie Obama into their pacifist agenda for the “new world” order. With such growing enthusiasm for an appeasement in the halls of Europe and in the ranks of the US Democratic party, it shouldn’t come as a surprise that the US/West’s enemies are feeling… a bit hopeful.

There is the smell of blood in the water, and the jihadists, those who actualy believe in what the Koran says, are busy sharpening their blades, while Western politicians dither and the Nobel academy lauds pacifism, and reveals their true European idea of how to “all just get along together”, appeasement to Islam. It’s the stuff traditional dhimmis are known, and can be expected to espouse. KGS

Picture of evil: Bloodthirsty German Al Qaeda fanaticposes with 2ft-long knife for beheading British soldiers in Afghanistan
An Al Qaeda fanatic who trains fellow Europeans to fight in Afghanistan has given a stark warning to our troops – by posing with a 2ft-long beheading knife. The bearded terrorist, identified as ‘Abu Askar the German’, belongs to one of Osama Bin Laden’s ‘foreign legions’ fighting alongside the Taliban.
In a new terror video posted online he vows to ‘achieve a victory for Islam’ using the huge blade, which is inscribed with an Arabic passage from the Quran. In pictures designed to scare British and American soldiers is also seen sitting with an AK47 rifle.
Terrorism expert and author Chris Dobson told The Sun: ‘The bloodthirsty threat of Abu Askar the German and his giant cleaver is plain – anyone who opposes us will lose their heads. ‘Fanatical Islamic Jihadists have a record of beheading captives and boasting about it to cause fear among their enemies.
‘Abu Askar and his knife are undoubtedly part of the “war of the mind” the Jihadists are waging against the West. ‘But they also reflect a growing confidence, especially among home-grown terrorists, that the West is becoming vulnerable.’