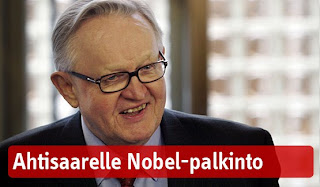 Last years nobel winner Ahtisaari:
Damn am I surprised, but solving the most important issue in the world
is worth giving the Nobel to an undeserving, self serving megalomaniac
Loons and buffoons. It never ceases to amaze how, otherwise intelligent people, can be so wrong headed. The former Finnish president’s statements shows just how deep the meme of “solving the ME crises will lead to a general stability throughout the Middle East and eslewhere”, actually is. Such thinking falls flat on its face in the light of day, but these politicians don’t bother with that, because they’re more interested in supporting “the narrative” than in addressing issues in a frank and realistic way.

That’s why Martti Ahtisaari can entertain eniterly foolish notions about the Arab-Israeli conflict, because that’s the accepted way of looking at the politics of the region. If you want to be included or remain included in “the club”, (and Ahtisaari, who heads the Cisis Management Initiative, is definately an active member) you can’t stray from the general held views of your fellow members, otherwise you risk being ostracized. So, Ahtisaari parrots the accepted party line.

The “Middle East conflict”, is not the only conflict, nor the only long running conflict in the world today, the fight for Kashmir is another one that ususually gets less mention, soleley because there’s no Jews involved. The solving of the conflict between the Arabs and Israelis will not unleash a wave of good will and tidings elswhere, solely because it has no bearing on what happens elsewhere. The sooner politicians begin presenting this politcally incorrect reality as a matter of fact, the sooner a more coherent strategy can be formulated in dealing with the problems in the region, and with fighting the jihad in general.

Ahtisaari Surprised By Obama’s Nobel Prize
The 2008 recipient of the Nobel Peace Prize, former Finnish President Martti Ahtisaari on Friday called the announcement of Brack Obama’s win this year surprising, and speculated that it may be in part aimed at encouraging the American president to seek peace in the Middle East.
“I have to say that it was quite a surprising move for the Nobel Committee to award the prize to Barack Obama. Maybe last year’s award was, too, I can’t say if it was surprising. But, at least in Norway it was seen as a return to what many consider Nobel’s original intention. In other words, last year the prize was awarded to someone who had a record of influencing peace processes,” said Martti Ahtisaari.
According to Ahtisaari, the decision is reminiscent of the prizes awarded during various phases of the Middle East peace process aimed at encouraging the parties in negotiations. He believes that winning the Nobel Peace Prize will put pressure on President Obama to bring about progress in the Middle East, as there is no more important issue on the agenda of the international community awaiting a solution.
Congratulations from President Halonen
President Tarja Halonen said Friday that Barack Obama has brought a long-needed turn in international politics towards a new kind of dialogue and multi-lateral cooperation.
She said that she hopes that the awarding of the prize to Obama will encourage cooperation to solve global problems.