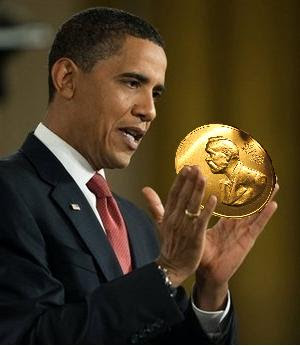 NOTE: Here is one more reason as to why the Nobel has become a parody. “2004 winner, Wangari Maathai: “HIV virus might have been made in a laboratory as a plot against Africans.”

YES VIRGINIA, BARACK HUSSEIN OBAMA
DESERVES HIS NOBEL-PEACE-PRIZE
By Nidra Poller
Paris 9 October 2009
Surprised? Shocked? Outraged? Not me. I’m delighted to see that the Nobel-Peace-Prize has been awarded to the person who most richly deserves it. Not only has he made gigantic efforts to promote Nobel-Peace in his nine short months in office but as president of the residually powerful United States of America he has the superforce to impose Nobel-style peace.
President and Nobel Prince of Peace Obama is not naïve, inept, inexperienced, or wet behind the ears. He is practicing what he preached. He has already fulfilled more promises than most voters ever suspected were being made. And the way things are going, only a miracle will keep him from delivering on the rest.
Bat Ye’or teaches us the meaning of peace in our times, the peace of dhimmitude, the peace that Nobel Norwegians have dutifully honored. It is the peace of convert or die…or hang in by the skin of your teeth. When the heads have been severed from the stiff necks that refuse Islam, when the converted have been folded into the prostrate masses of the ummah, the dhimmis hand over the keys to their granges, their wives and children, their hearts and minds, their lands and dwellings in exchange for a fragile peace requiring endless sacrifice and constant restraint.
This is the peace of dhimmitude, this is the peace Nobelly rewarded in…uhhh…Oslo, right? And B Hussein O is the most deserving laureate. On the very day the prize was announced, forty people were killed in a jihad attack in Peshawar Pakistan. Do you remember, way back when, during the campaign, he narrowed his eyes and said Iraq’s a distraction, let me get my hands on the trigger and I’ll take care of Pakistan. There you have it. A promise keeper of the first order. Iraq was also a distraction from Afghanistan. So mister Taliban tally your bananas, we’ve got other fish to fry, do your jihad thing and we’ll lower our eyes, peace be upon you.
President Obama’s Cairo speech alone earned him enough points to get this prize hands down. His bow to the king of Saudi Arabia. His consistent snubbing of European leaders. His betrayal of Poland and the Czech Republic. His outstretched hand that reaches all the way to Iran’s nuclear sites and protects them from rain, hail, and Israel. His betrayal of Persians yearning for democracy. His reluctance to look into McChrystal’s ball and find some kind of half way plausible strategy for the overseas contingency whatchamegig in Afghanistan.
Am I being coy? Why haven’t I mentioned his master plan for the nuclear disarmament of… Israel!
Leaving the best for last. Even if he had not done all of the above, dayenu, he would be worthy of being hoisted on high in the Nobel firmament because he has declared war on Jewish construction in choice neighborhoods of al Quds and wannabe Palestine. Donche know, if you want peace be prepared to make war. And if you want the peace of jihad, make war on the Jews. Point your finger at them like a smoking gun. Sock it to ‘em like a latter day koranic saint. Grab them by the scruff of the neck and scold them for all the world to see. Sic ‘em with Goldstone, saddle them with Abbas, and send them to bed without dinner and ammunition. They wanted planes to fight to win? Stop the program, cancel the contracts, and if they holler strangle them with peace. Play footsy with Hamas, set up a mahjong date with Ahmadinejad, make cuddly eyes at Assad, and secretly decorate the private quarters of the White House with shahid posters, who would dare to protest?
Did you hear the latest? Anonymous sources have leaked to the press a flood of indignation from the peaceful Obama to you know who in the holy land. Aha! You thought he was fed up because his moderate ally Abu Mazen has reverted to PLO same o same o? Stirring up trouble on the Temple Mount because a bunch of French tourists got in the way of some irate Palestinian rocks? Which naturally led the Palestinians to go on a rampage in the narrow lanes of the Old City. How can President Obama call for the creation of a Palestinian state the day after tomorrow when his protégés are rousing a billion and a half Muslims to protect al Aqsa…from French tourists?
No. That’s not why the Nobelly anointed young man is indignant. He is pissed off because Israelis are badmouthing him. Big shots and little guys in the street and on the beach, officials and cab drivers and housewives and left wing columnists are criticizing him.
Watch out. Even a Nobel-Peace-Prizer can lose his temper and explode. But then, who would blame him? What’s more dangerous for world peace, a flock of Taliban or a gaggle of chuzpadike Israelis?
Hail to the Chief for reaching out to the Taliban and forgiving them for he knows not what they do, reaching out to the Muslim Brotherhood in all its forms and machinations, reaching out to the democratically elected Ahmadinejad and drawing a veil over the rape of the innocents, reaching out to Putin over the half dead body of Georgia…and trying to close Gitmo if only the jack-in-the-box would sit down and shut up.
And if he manages to push his health care revolution bill down US throats, they’ll give him the Nobel Prize for Medicine next year. On the other hand, if he can maintain double digit unemployment and bring the dollar down to parity with the yuan he could outdistance Mugabe for the Nobel Prize for Economics.
A Nobel Prize to the wise is sufficient: when you hear the word “peace” praise the lord and pass the ammunition.