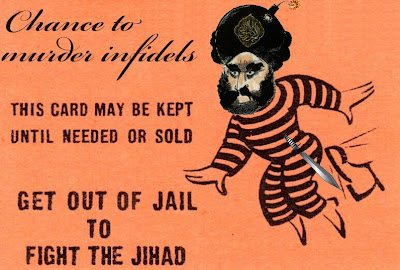 Pakistan believes the money is to fight the jihad…not against it.
Pakistan’s ISI giving Taliban members option of
going to jail or joining jihad against India
Jihad Watch: Fiend, er, Friend and Ally Update. “Go to jail or join jihad against India: ISI tells surrendered Taliban,” by Vishwa Mohan for the Times News Network, October 7 (thanks to all who sent this in):
NEW DELHI: In a new shift in tactics, Pakistan is planning to push as many as 60 “surrendered” Taliban into Jammu and Kashmir to become part of the “jihad” against India. The ISI is said to have offered the extremists the option of either going to jail or crossing the Line of Control.
The “jail or jihad” option offered to the Taliban seems a useful diversion for ISI. The Pakistan military establishment has had to fight the Taliban, once its close allies in Afghanistan, but is looking to turn the situation to its advantage.
Apprehensions in Indian security circles that the crackdown by the Pakistan army on Taliban — seen as a last resort after the jihadis turned their guns on the Pakistani state — could mean trouble in Kashmir are being proved correct. Not only have infiltration attempts by regular jihadi outfits like Lashkar-e-Taiba gone up, the presence of Taliban poses a new threat.
Highly placed sources said BSF and the Army had been alerted about the developments after intelligence intercepted talk about infiltration bids in the next 15 to 20 days.
“Although the Taliban is yet to successfully infiltrate into India, the coming days will pose a challenge as their attempts to sneak in are expected before the onset of winter,” said a senior official. The infiltration is closely controlled and monitored by the ISI and Pakistan army which is often involved in the crossings.