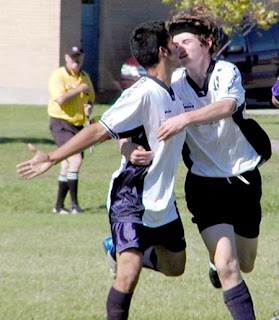 The Muslim team is afraid of losing to us
The only ones set to gain from being offended at the drop of a hat, are those who believe that they’re above all the rest, and are willing to prosecute when their world view is challenged. That’s the trouble with bending over backwards to Muslim sensibilities, because when it’s all said and done, it’s only their own sensibilities they care about. KGS
French gay soccer team snubbed by Muslim team
PARIS (AP) – A French gay soccer team says its members were victims of homophobia when a team of Muslim players refused to play a match against them. The Paris Foot Gay team says Tuesday it received an e-mail from the Creteil Bebel club canceling a match scheduled for last Sunday.
“Because of the principles of our team, which is a team of devout Muslims, we can’t play against you,” the e-mail said, according to Paris Foot Gay. The e-mail received Saturday said, “Our convictions are much more important than a simple football match.”
Paris Foot Gay said in a statement that it asked the amateur league to sanction Creteil Bebel. Zahir Belgarbi, identified as a spokesman for Creteil Bebel, told France-Info radio he apologized if “anyone felt upset or hurt.”