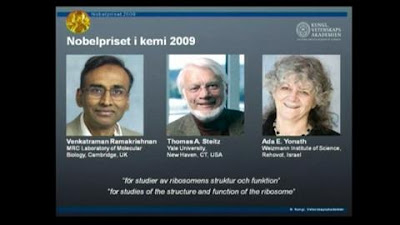 This year’s Nobel chemistry prize went to:
Venkatraman Ramakrishnan (SAA), Thomas Steitz and Ada Yonath.
[Finnish YLE used SVT’s pic for story on Nobel prize winners]
For the STT, Israel doesn’t exist! They refrain from mentioning the country she’s from,…Israel! The Tundra Tabloids good friend and colleague Ilya Meyer explains:
Israel does not exist!
Not according to Swedish news agency TT.
The Swedish Nobel Prize committee today announced the winners of the 2009 Nobel Prize in Chemistry. The three joint winners are Mr Venkatraman Ramakrishnan, from the UK, Mr Thomas A. Steitz from the USA, and Ms Ada E. Yonath from Israel.
Swedish news monopoly TT (Tidningarnas Telegrambyrå), however, refused to report on the nationality of Ms Yonath, stating merely that she was born in Jerusalem. TT meticulously stated the nationalities of the other two Nobel Prize winners.
Sweden’s TT is in the vanguard of a nationwide campaign to demonise and delegitimise the State of Israel and is highly successful in indoctrinating the entire nation in anti-Israel sentiment. TT pursues a strict policy of anti-Israel news slant in the media and its reporting on the Middle East is often perceived as barely disguised anti-Semitism.
One of the main shareholders of TT with a 40 percent stake in the company is Swedish tabloid Aftonbladet. Aftonbladet recently rose to prominence when it published what was widely regarded as an anti-Semitic diatribe in the form of a highly controversial and totally unsubstantiated article on organ trafficking.
Read it all here. KGS