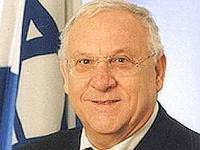 And guess what? He’s right! All good common sense and reason dictate that the Arabs should be given some form of autonomy, but not the sovereignty befitting a state. Reason being, it would only be used as a jumping point to undermine the state of Israel. It would lead to REAL war, and Israel shouldn’t sign on to anything that would allow its sworn enemy a chance to do just that. It’s suicide. KGS

Rome, 7 October (AKI) – Israel’s parliament speaker Reuven Rivlin told an Italian daily that the Palestinians would be given autonomy but not a real state. “The Palestinian state cannot be a real state, but it will have only autonomy. It would have the sovereignty but not the ability to threaten Israel’s existence,” said Rivlin in an interview with Italian daily La Stampa.
Rivlin, 69 and former communications minister, is a member of the conservative Likud party whose chairman is Israeli prime minister Benjamin Netanyahu. He arrived in Rome on 5 October and held talks with Italian foreign minister Franco Frattini as well as Italy’s parliament speaker Gianfranco Fini.
The Knesset speaker also said he was against the division of Jerusalem, saying the city “is a microcosm that allows Israelis and Arabs to live together.”
“To divide once again the sovereignty of Jerusalem would mean to transform it into a Middle Eastern Belfast, a volcano that would spark conflict in the entire region,” Rivlin told La Stampa.
In regard to Palestinian president Mahmoud Abbas and the Gaza-ruling movement Hamas, Rivlin said that Israel is not willing to reach an agreement solely with Abbas.
Abbas “has understood that peace with Israel is a strategic need for the Palestinian people,” but underlined that Abbas “does not control Hamas, which rejects Israel’s right to exist.”
Rivlin also spoke of Iran and its alleged nuclear weapons programme. He claimed the country was playing for time.
“But it is time to say enough, time has run out: we are in extra time now: it is not a problem of Israel, but of the entire world,” he said.
Rivlin said the only way peace could be achieved with Syria is if president Bashar al-Assad “would come to Jerusalem and speak to the Knesset (parliament) like (former Egyptian president) Sadat did: but he would have to announce that he wants to live in peace with us.”