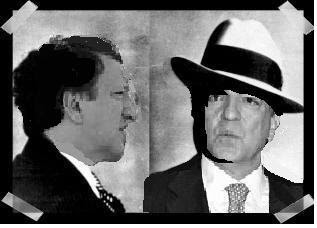 “José Manuel Durão Barroso, now President of the European Commission, became politically active after the Portuguese Carnation Revolution of 1974, in the Marxist-Leninist Students Federation, the now extinct youth wing of the PCTP/MRPP (Communist Party of the Portuguese Workers/Reorganising Movement of the Proletariat).
A Maoist Revolutionary Party connected at a certain time in Portugal with having liaisons to terrorist actions.
Assuming a political position that was in accordance with the country’s main political atmosphere in that period, Barroso gets notorious for daubing anti-capitalist slogans on walls and seizing the law faculty’s furniture, rapidly moving high in the Maoist youth’s hierarchy.
But Portugal’s political scenery would rapidly change; as the Extreme-Left fails in gaining control over the country’s political destiny, Barroso decides to take a study period aboard. Upon his return to the country he would ingress in the major independent movement of the Right, the PPD-PSD party, where once again he manage to climb high in the hierarchy ladder, due manly to some internal party coups.”

So that’s that background to the man who now heads the cartel of governments called the EU, that managed to strongarm the Irish into voting its way. And the people cheer. KGS

How the EU Got the Irish to ‘Yes’
DUBLIN—Ladbrokes in downtown Dublin was paying one to 33 that Irish voters would approve Europe’s Lisbon Treaty, against eight to one that they would strike it down. For non-gamblers, that means the betting chain thought the EU charter was a favorite to win—by a lot.

Two doors down, patrons of the Sackville Lounge turned away from televised horse races to reveal why. After Irish voters spurned the treaty in a referendum last year, the European Commission—the EU’s unelected legislative, regulatory and executive branch whose power would be cemented under the treaty—left little to chance this time around. Here is how Brussels did it:

1. Don’t let a good crisis go to waste: Playing to voter apathy backfired in Ireland last year, but in the fall of 2009 a much more powerful tool presented itself for the Commission and its Dublin backers: fear. Specifically, fear of economic isolation.

An Irish Times reporter asked Commission President José Manuel Barroso at a victory press conference on Saturday about allegations of fear mongering. Mr. Barroso was all innocence: “Scare tactics? I don’t know what you mean by that.”

Perhaps Mr. Barroso forgot the interview he gave to the Irish Times two weeks ago, where he seemed concerned that “some people”—still unnamed—had asked him whether Ireland would leave the EU, adding that “For investor confidence, it is important that there is certainty about the future of Ireland in the EU.” So while Mr. Barroso knew Ireland could reject Lisbon without risking full EU and euro membership, he calculated that in an era of 12.6% Irish unemployment, stoking nerves over capital flight would have a big impact.

That message was clear enough to Ruairí Brennan, a 24-year-old student who explained his Yes vote to me over ale at the Sackville. “We have no money, that’s what it comes down to,” he said. “If we go against them, they’ll go against us.”

He produced a pamphlet from Ireland For Europe, a coalition of Yes-ite business and civic leaders. The leaflet states that the EU has invested more than €70 billion in Ireland. Mr. Barroso gave the Irish a well-timed reminder of such largesse last month, when he announced €14.8 million to help laid-off Irish workers. It’s true that Ireland received €566 million more from EU coffers last year than it contributed, but this difference accounted for only 0.36% of Ireland’s gross national income, by the Commission’s own figures—hardly the lynchpin of the health and wealth of the Celtic Tiger.

The pamphlet also echoes the Yes campaign’s claim that approval of the treaty will mean jobs. But Lisbon’s promise that a reformed EU will be “aiming at full employment” is no guarantee that Mr. Brennan will graduate to a host of job offers. The best hope for that happy prospect is, rather, his own hard work and Ireland’s own pro-growth tax policies—which Lisbon could give other EU countries the power to thwart. No question, the monetary discipline that came with Ireland’s adoption of the euro will also brighten Mr. Brennan’s future, but contrary to Mr. Barroso’s insinuations, Mr. Brennan would not have been risking this had he voted No.

2. Activate the herd mentality: Alongside the economic threats, Irish voters were subjected to the even more vague minacity that Ireland would somehow be shunned by the rest of the bloc. After the Republic rejected the treaty last year, Brussels mandarins ignited the rumor that a two-tier Europe could be the solution. Though such isolation within the EU is impossible, the rumors stuck, cemented by Yes campaign posters telling voters to say “Yes to Europe,” rather than to the 294-page document on offer.

“We wouldn’t have the same authority, we’d be out on the fringes,” said Hugh McGinn, a teetotaling taxi driver, when asked what arguments had most swayed his Yes vote.

Such arguments are incorrect, but one can forgive Mr. McGinn for believing them. The official “Statement for the Information of Voters,” prescribed by Ireland’s Oireachtas (or Parliament) and distributed to voters and posted at polling stations, opened by saying a Yes vote would “(a) affirm Ireland’s commitment to the European Union” and “(b) enable Ireland to ratify the Treaty of Lisbon and to be a member of the European Union established by that Treaty.”

So much for informed democracy. Ireland’s “commitment” to the existing EU was not up for a vote, and without Irish ratification there would have been no reformed EU for Ireland to be, or not be, a member of.

But the contrary point was central to the peer pressure targeting Ireland: That if Ireland voted no, it would spoil reforms for the rest of Europe’s 500 million citizens, as if they too had been given a say in the matter (they hadn’t). This awkward position of serving as proxies for democracy for half a billion people weighed on the minds of Irish voters. At the Sackville, 19-year-old student Shane Gaynor asserted that his Yes vote was as much for Europe as for Ireland. “After all Europe has given us, it’s time to give something back,” he said.

Lauren Bacon, also a student and also 19, saw it differently. “We’re the only country that even got a vote on this. We shouldn’t throw away what other countries didn’t even have.”

This is something the EU cartel of governments in Brussels can agree with whole heartedly. The present system, especially after Lisbon is ratified in whole, allows them to circumvent their own (now neutered) national governments and create legislation, then pass them in Brussels without ever inquiring from the people they are supposed to represent.