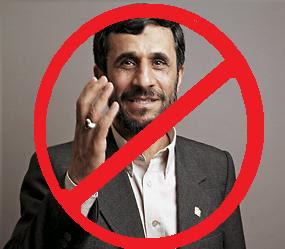 Never been a Jew
The Tundra Tabloids has been sent emails concerning reports about the Iranian president’s supposed “Jewish roots”. The TT was not inclined to give the story any gas, and only because a very valued source weighs in on the matter, WHO KNOWS WHAT HE’S TALKING ABOUT, does the TT now mention the story.
“Just before we decide to include Ahmadinejad in a Minyan, it would be good to know that the story is nice but apparently far from the truth. Sabourjian is not a Jewish name, Sabour is not a Talit and in Aradan there were no Jews. Other than that everything else is true.”
And for those still not satisfied, due to a blogger being arrested for claiming that Moody has Jewish roots, “In Iran, just the notion of a “Jewish President” is sufficient for an arrest.” Besides, there is no better way for a Muslim to discredit another Muslim, than to allude to him or her having Jewish roots. This story has no gas.
However, and most importantly, it’s not about Ahmadinejad, but about the clique of radical Mullahs who placed him where he is. They believe in the things he says, it is they, the Mullahs, who are speaking through him. Moody is just a stooge and lightening rod for the Mullah run council.
But it doesn’t end there. Those involved (other influential and highly corrupted mullahs like for exm., Rafsanjani) in the organizing of the anti-election results protests this summer, are as anti-Semitic as the ones controlling Iran. Using stooges like Ahmadinejad, akin to the former Saddam Hussein regime using Christian stooges like former foreign minister Tariq Aziz, is how they control power and maintain it.
While it’s an interesting anomaly, a supposedly former Jew (he’s not) wanting to commit genocide of Jews, what’s of more importance is the people backing him and ensuring that he stays in power. They showed just how radical they were by risking it all in rigging a vote that was going their way regardless. Iran is not ruled by rational group of people, and all the more reason to take seriously their consistant calls for the genocide of Israel.