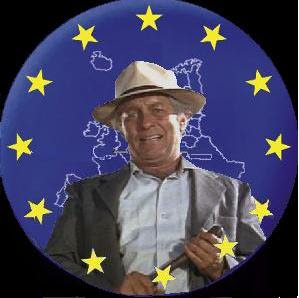 What we’ve got here is,
failure to communicate
That’s how it’s done here in Europe, the people will be forced to vote until they vote the “right way”. This is not a republic, but a “democratic” tyranny. A cartel of governments invent and pass legislation in a Brussels unanswerable to the average citizen, which are then rubber stamped by the parliaments of the member states. Remember folks, over 70-80% of the legislation approved yearly by member states originate in Brussels.
The people who make up the “working groups” who invent the directives are completely unkown, no single journalist knows any of the people that comprise the hundreds of working groups, and what conflicts of interests they may have in the legislation they are dreaming up for the commissions to ponder on.
This is an usurpation of the democratic process, where fog, blue smoke and trick mirrors rule the day, and the average people are fed a diet of “euphoria for the EU” through massive funding aimed at keeping people in dark about what really goes on. Funny how the media never really gets interested in digging any dirt about anything that happens within the EU machine, all is roses. The Finns are as blue eyed about the EU as the rest, caring not one bit, that little by little, their own self determination is being slowly extinguished. KGS
Ireland looks set to say ‘yes’ to Europe

Ireland is set to accept the EU’s Lisbon treaty, with opinion and exit polls showing a convincing win for the “Yes” vote. Counting is still underway but Irish ministers are already heralding victory, while anti-EU campaigners have conceded defeat.

Ireland was seen as the last hurdle in ratifying the Lisbon treaty, which will introduce a raft of new ‘streamlining’ measures and an EU presidency. Just eighteen months ago the country voted against the treaty in the first referendum, but yesterday’s poll saw a far higher turn-out with over 50% of the country voting.

Today an informal exit poll by the main opposition Fine Gael party estimated a 60% “Yes” vote, compared to the 46.6% last year. All Ireland’s major parties, apart from Sinn Fein, support for the treaty, with prime minister Brian Cowen, warning rejecting it again would lead to the country being economically sidelined.

Opponents claim the treaty will undermine Irish sovereignty by handing over more power to the federalist government of the EU. Leader of the anti-Lisbon lobby group Libertas Declan Ganley today admitted they had failed to sway the vote a second time.

The millionaire businessman blamed people’s fears over the economy for the result, saying: “I’m surprised how big the Yes vote is. It just shows how scared people are.”