Skip to content
Home
/
2009
/
September
/
30
/
Disputed Territories
/
ISRAEL LIFTS ROADBLOCKS TO PLEASE OBAMA AND ENDS WITH ISRAELI BEING SHOT…….
Facebook
Twitter
Google+
LinkedIn
Pinterest
That’s what happens when sound advice
is not heeded and caution is thrown to the wind 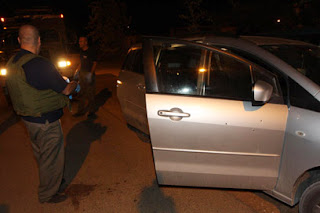 Pleasing Obama leads to shooting
What’s that you say, how can the TT blame the US administration for a shooting in the disputed territories? As soon as the Obama administration took to pressuring the Israelis to do something that common sense and reason dictates against, the outcome was already being set in motion, it was only a matter of when it would happen, not if.  KGS
Israeli shot in West Bank

An Israeli citizen suffered mild to moderate gunshot wounds to his hand Tuesday evening near the West Bank settlement of Shvut Rachel, north of Jerusalem. According to local settlers, at approximately 8 pm unknown assailants opened fire at an Israeli vehicle travelling east of Shvut Rachel.
The injured Israeli continued driving until he reached the entrance to the settlement of Kida, where he received medical treatment from security forces. The man was later evacuated to Hadassah Ein Kerem Hospital in Jerusalem.
The shots apparently came from terrorists positioned at the side of the road. “This is the fourth shooting in the area in the past four months,” Binyamin Council Head Avi Roeh told Ynet.
“This attack is a direct result of the removal of roadblocks. It’s only by some miracle that the outcome of these attacks has been no worse than injuries, but you cannot base security policies on miracles.”
In August two Israelis were lightly injured near the Givat Haroeh outpost. The Israelis said Palestinians opened fire on the vehicle they were travelling in. The shooters fled the scene and have yet to be apprehended.