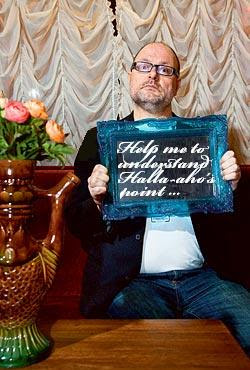 “I wanted to criticize with my writings, the practice, in which, along with multiculturalism has gained a foot hold in our society, which is that different ethnic groups have different rules. The law protects different ethnic groups with different force, and I think this is an unbearable situation in a society whose constitution states, that all human beings are equal under the law.”
The situation *is* indeed intolerable as Jussi Halla-aho states, in that the Finnish judicial system does not offer the same protection to ALL of it’s citizens. Some are more worthy than others. The Finnish state has now shown itself in the Halla-aho case to be more than willing to “be offended for others“, in that not even a charge had been filed against the city councilman by a representative from the Finnish Muslim community, and yet the state prosecutor’s office began an investigation all on its own.
This is indeed, an intolerable situation. We have now in Finland, an even more ambiguous situation, in which no one knows what’s exactly permissable to write in public, under Finnish law. But it does looks like if you want to write just about anything about the host society, that’s ok, but if you write anything regarding a minority that might or might not cause offense to them (or to the state), you then risk being hauled before the judge and forced to pay a fine.
But going back to what Ruben Stiller states about anti-Semitism and anti-Islam writings, this is another area where, IMHO, he gets it totally wrong.
Anti-Semitism is based on the irrational fear and loathing of the Jews, and any slanders, lies or libels resulting from that hatred towards a particular person, can be addressed by the court system, in that the person filing the charges, has to prove that the claims made were indeed false, and spread with malicious intent. Anti-Semitism is an evil that needs to be confronted wherever it rasies its head, but not through the court system, but in the public arena of debate, where such stupid thinking is raked over the coals and the person relegated to the fringes of society where he/she belongs.
What Ruben Stiller has done, is to buy into the whole agenda of the Organization of the Islamic Conference, whose ten year agenda is to secure a special place for Islam, which will shield it from all kinds of criticism and rebuke. Not only from the non-Muslim community, but from the Muslim community as well. Mr.Stiller has taken to pitching his tent with the world’s largest Islamic organization that seeks the destruction of Israel and all other religious life.
Islam is not here to co-exist with others, but to supplant them, to rid the Jews from  their Judaism, and Christians from their Christianity Hindus from their Hindusim and so on. Once we allow for “religious sensibilities” to dictate what we can say or do, it’s the begining of the end for a free society, because you will always be placing your own right to free expression at the chopping block of another group’s sensibilities.
Everyone is offended over one thing or another. What about the majority of non-Muslim Finland, should we file suit against the Islamic community for spreading false statements that we are infidels, pagans and less worthy than that of a Muslim? Should we start taking all religious communities to task for what they say about the non-believer?
Stiller gets it all wrong, and badly. This is not about an ethnicity, race or a people, but about an ideology called Islam, that yes, supports the marriage of pre-pubescent girls to older men, and all because their prophet Mohamed is regarded as the supreme example of human character, and to act in the way of the prophet is deemed just and logical. That is what Jussi Halla-aho was driving at.  KGS