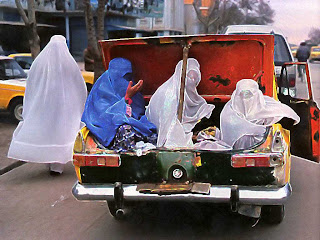 Back to basics Islam:
It’s not liberating, but dehumanizing

It never ceases to amaze the Tundra Tabloids how apologizers for Islamic institutionalized misogyny, love to point out that Muslim women actually look on the burka as a form of liberation. Granted, there may be some women so badly brainwashed as to think that’s actually the case, but for those women who have not undergone the full brainwashing experience, they’re of course less keen on becoming nameless, faceless and figureless entities floating around society like ghosts on Halloween night.

The following article by Jacqueline Pascarl is a couple of months old, and the TT takes exception to some of the things she mentions about Islam and the burka-free, Queen Rania of Jordan, (the problem is indeed Islam, and Queen Rania is queen of an openly anti-Semitic country) but what she has to say about the burka, as well as the pressure the Islamic community place upon the father/husband to ensure that their womenfolk are behaving in accordance to Islamic traditions, is spot on.

Such community pressure on males, places their own value and self esteem in the balance, which is then measured by how “Islamic” of a lifestyle their womenfolk appear to be living. Remember, how free a woman is within Islam, depends on how liberal the male is, not the woman. It’s all HIGHLY hypocritical, but that’s Islam, the more in touch they get with their “Inner Mohamed” the more intolerant, violent and restrictive they become.

Here is a portion of the article by, Jacqueline Pascarl, and then following that, a portion from a recent interview of the Sri Lankan apostate, Rifqa Bary, who fled from her family for fear of her life after they found out she became a Christian. The points Pascarl touches on in her article, relates directly to what Bary has been experiencing over the past few months. KGS

The truth behind the burqa

[…] As a royal princess in an Islamic country (Malaysia), and originally hailing from Australia, I was required, after my marriage, to undertake four years of Islamic study under the tutelage of the Royal Household’s Iman and religious teacher. We used text books primarily sourced from Pakistan and Egypt which had been specially printed in English for converts to Islam, as well as long tracts of the Koran and my tutor’s own knowledge and interpretations as he was a respected scholar nationally.

These twice weekly classes over four years, were never undertaken between myself and my teacher without the presence of my servants, or another royal lady who acted as chaperones – not for my chastity or purity, but, as the Iman explained to me, for his! He truly believed that I, or any woman, could not be trusted in the lone company of a male without the baser instincts of the female gender coming to the fore.

According to these books, I was to learn that it was fine for a husband to beat his wife as long as he didn’t mark her face, I was to ascertain that female circumcision was not mandatory or even mentioned in the Koran, that it is a cultural practice only. However, the father who does instigate the excision of the clitoris of his female child will be rewarded in heaven – this again, I stress, was not mentioned anywhere in the Koran, but simply extrapolated from cultural musings of a scholarly nature. That abhorrent undertaking is about control of women and tempering their sensuality – it has nothing to do with religion and I have yet to meet any Australian Iman who would say otherwise.[…]

I have heard it argued by a young Muslim teenager that a hijab or a burqa denotes a female as a “girl or woman of dignity”. My gentle reply was that demeanour and deeds denote dignity, not a piece of fabric. The Koran mentions modesty, but does not describe a burqa or a hijab.

Which brings me to another point, it is most often the strictures imposed by the fathers and husbands within the Islamic communities that lead women to take up the hijab or the burqa. The social pressure on the males, their fear of perceptions within male circles, leads to the demand that their female relatives cloak themselves in what they perceive to be the trappings of honour to ensure, and demonstrate their trustworthiness and prove a lack of feminine sexual sophistication. In other words, the worth of a man is valued in how they control their womenfolk. Frankly, it’s a rather akin to preserving the wrappings on valuable goods before they’re purchased.

But it is implicit within well educated Islamic circles that head coverings on women are a cultural, and or personal choice, not necessarily a religious one except during prayer.

Rifqa Bary: “The Islamic community there is very strong, and that’s how my parents … I had a facebookcommunity, the mosque found out that my name was related to Jesus and I had things about God in there, Jesus, and was screaming about Jesus and he talked about Jesus, and phone calls and emails started pouring in and threats were made by my father, and that was when I had to make the decision to either leave or denounce my faith.”