The Tundra Tabloids received this announcement from the IFPS last night, and from tomorrow on, the TT will be celebrating this day and every anniversary of this day, which commemerates the day the dreaded Danish Mohammed cartoons were first published in Jyllands-Posten, on September 30th, 2005. KGS 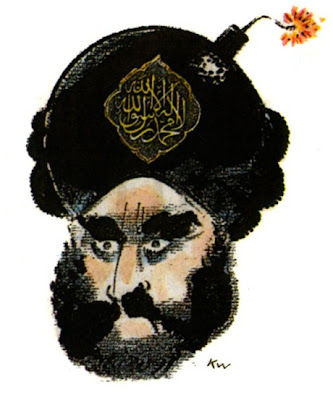 New York, NY — September 28, 2009: On September 30, 2005 the Danish newspaper Jyllands-Posten published 12 drawings of Islam’s prophet Mohammed by 12 Danish artists in order to demonstrate that prohibitions on depictions of Mohammed as stipulated by Islamic law (sharia) did not trump Denmark’s freedom of the press.
In an era in which the act of speaking out in the Western world has become increasingly subject to the pressures of what we know as political correctness, this bold affirmation of free press rights by Danish journalists makes September 30 a banner day. In commemoration of their courage, then, the International Free Press Society declares September 30 to be International Free Press Day.
To mark the occasion, the International Free Press Society is presenting artist Kurt Westergaard on his first public tour in the USA, where he will be making appearances in New York City, Yale and Princeton. Since publishing his cartoon, the now-iconic Turban-bomb Mohammed image, Westergaard, 73, has required state security to protect him from violent retribution for violating the tenets of sharia in Denmark. Such threats have included an assassination plot uncovered by Danish police in February of last year. The day after the plot was uncovered, a number of Danish newspapers joined Jyllands-Posten in reprinting the Westergaard cartoon in solidarity with the cause of freedom of the press.
To further advance the cause of freedom of the press, the International Free Press Society will use the occasion of this first International Free Press Day to salute Kurt Westergaard, and to call, once again, for the repeal of all blasphemy and hate speech laws that currently inhibit and restrict vital exchange and debate.