Skip to content
Home
/
2009
/
September
/
28
/
Uncategorized
/
US:OBAMA TALKED WITH HIS MILITARY COMMANDER ONLY ONCE IN 70 DAYS: IS THIS ANY WAY FOR THE CIC TO RUN A WAR…….?
Facebook
Twitter
Google+
LinkedIn
Pinterest
Yes, if he doesn’t
intend to win it 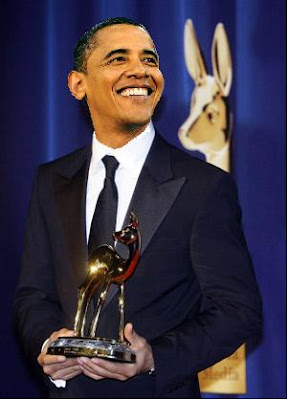 Obambi:
I won the presidency, that’s good enough for me

Remember folks, during the campaign for the US presidency, Obama stated repeatedly that Afghanistan would be the main focus for his administration, not Iraq, in defeating al-Qaida and its fellow travellers. Now it has come to light that, Obama has been light, in his being kept up to date with his main miltitary commander in the Afghan theatre. 70 days without any conference between the commander in chief and his top general, does not bode well for an Allied success in the war.

Even during the times of the Roman Empire, the Senate, and then latter the Emporers always had a constant line of communications going between themselves and their generals, somehow Obama feels he has little use for talks with his commanders. This is a real bad development, because at a time when Obama needs to be seen as being serious about leading and winning in Afghanistan, he appears not concerned in the least about the outcome. The TT smells a ‘cut and run’ policy in the works. KGS

U.S. commander in Afghanistan talked with Obama only once

The military general credited with capturing Saddam Hussein and killing the leader of al Qaeda in Iraq, Abu Musab al-Zarqawi, says he has spoken with President Obama only once since taking command in Afghanistan.

“I’ve talked to the president, since I’ve been here, once on a VTC ,” Gen. Stanley McChrystal told CBS reporter David Martin in a television interview that aired Sunday.

“That is correct,” the general replied.

This revelation comes amid the explosive publication of an classified report written by the general that said the war in Afghanistan “will likely result in failure” if more troops are not added next year. Yet, the debate over health care reform continues to dominate Washington’s political discussions.