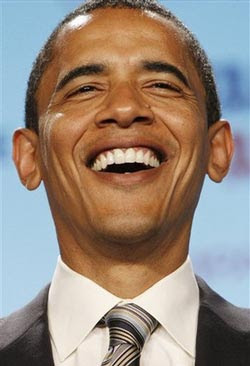 Obama: I thunk it up all by myself!

I have to agree with Pamela Geller at Atlas, what is the common sense behind releasing Gitmo prisoners at a time when the US is busy rounding up the very same vermin who were planning an Al-Qaida attack within the US? KGS

Obama Administration Frees Three More Gitmo Detainees
The Department of Justice Saturday evening announced that two detainees had been transferred from Guantanamo Bay to Ireland, and one had been transferred to Yemen.
There are more than 220 detainees remaining at the prison. In the last couple months, the White House has made it increasingly clear that the President will not make his self-stated January 22, 2010 deadline to close to prison.
Alla Ali Bin Ali Ahmed, a native of Yemen, was captured in Pakistan in 2002 and returned to Yemen today.
Known at Gitmo as Captive 692, the government labeled Ali Ahmed an “enemy combatant,” saying he “was associated with Al-Qaeda. He was present on the front lines in Bagram, Afghanistan. He was identified by a senior Al-Qaeda facilitator as having been a resident at a safehouse in Kandahar, Afghanistan in 2000 (his individual also saw the detainee at a safehouse located in Faisalabad, Pakistan in February 2002 with a group of Yemenis who had fled Afghanistan). Finally, the Detainee was identified by another individual, a senior Al-Qaeda operational planner, as having resided at a safehouse located in Kandahar in 2001.”
Al Ahmed denied almost all of the charges.
“I never went to Afghanistan, ever. You have to prove how you came to the conclusion that I am a member of the Taliban,” he told a military commission.
Al Ahmed claimed he left Sana’a, Yemen around 2000 for Karachi, Pakistan to learn about textiles, with $3,500 — most of which was from his mother — in his pocket.
After several months of partying — “We spent the whole six months going out, having fun, ladies,” he says of one leg of his journey — he ended up in a house full of university students in Faisalabad, Pakistan.
“I didn’t have any relationships with anyone in that house,” Al Ahmed testified. “They were trying to inspire me and to do the religious things, like look at my religion because most of the students were studying the Koran…They realized that we weren’t really in harmony together because I used to use drugs and hashish and things like that. I used to read magazine. Most of the time, I would stay in the backyard, so I was keeping my distance from them.”
“I stayed two weeks and the Pakistani government came and captured all of us,” Ali Ahmed said.