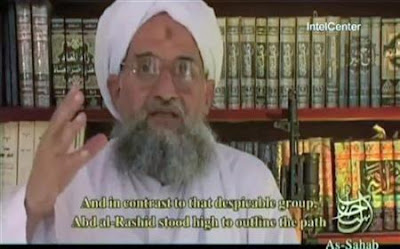 Al-Qaida’s No.2:
We’re finding it harder to get our tapes out on time
Interestingly enough, the tape is way overdue, which reflects their own difficulty in getting a steady flow of communications going to and from their goat caves. That said, there still exists a pirate network of the Jihadi movement that doesn’t need a main base of operations to take orders from, they all basically know the aims of the parent group and the means to carry out their terrorism.
It’s great news that Al-Qaida is diminished in its capabilities to arrange grand scale terrorist attacks…but as Mumbai shows, there are plenty of groups that have picked up where Al-Qaida has stalled. Hezbollah is now without a doubt the most well funded and widespread single terrorist organization in existence today, click on the link below.  KGS
Al Qaeda releases new 9/11 video showing Zawahri
DUBAI (Al-Reuters) – Al Qaeda’s number two Ayman al-Zawahri appeared on Tuesday in a new video apparently marking the anniversary of the September 11, 2001 attacks against the United States, according to a U.S.-based terrorism monitoring service. Zawahri was among leading figures from the group who spoke in the 106-minute Arabic-language video, entitled “The West … and The Dark Tunnel,” SITE Institute said.
The video mentioned events of the past year including the global financial crisis and the election of U.S. President Barack Obama. It was posted on websites often used by al Qaeda supporters. On September 14, al Qaeda leader Osama bin Laden warned the American people over their government’s close ties with Israel in an apparently new audio tape posted on an Islamist website.
That message, entitled “A statement to the American people,” was around 11 minutes long. Analysts suggested that the posting of the latest tape might have been delayed by nearly two weeks after the anniversary of the attacks because websites have been jammed or because al Qaeda is finding it harder to operate.
Bin Laden and Zawahri are thought to be in the mountainous territory along the Afghanistan-Pakistan border, where U.S. forces and the Pakistani military are locked in conflict with militant groups allied to al Qaeda.