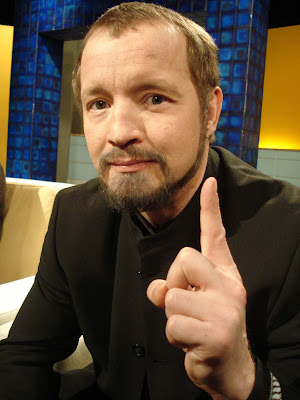 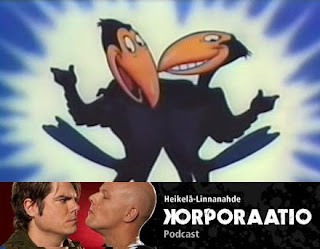 “Simo Rantalainen has long been referred to as Mujahedin Risto bin Faisal. How passionately does Rantalainen take to professing his religion? At least on the Corporation broadcast he does so passionately, that he threatened the critic of the Islamic faith, Jussi Halla-aho, live on the air.”

The Hekyll & Jekyll tag team of Jussi Heikelä and Aki Linnanahde should be removed from their positions from the station and Mujahed Faisal investigated by the police concerning his veiled threats against the city councilman. What’s also noteworthy, is that “Faisal” was born and raised in Finland, and KNOWS how religion, noteably Christianity, is degraded by many within the Finnish talk radio community, especially since he himself, was at one time a radio host/personality.
But once again we are witness to yet another convert to Islam, who believes that every insult directed against the madman prophet, has to be met with either violence or threats of violence. I wonder why they keep getting it all wrong, if Islam is the supposed the “reglion of peace”?  KGS
H/T: Vasarahammer and Kumitonttu
Korporaatio: Simo Rantalainen threatens Jussi Halla-aho

Rantalainen: (Iraq, Afghanistan, etc.) … if we do not fight back, then soon the Jewish arms dealers, will crush us here. And I can not accept that.

Announcer: What are you going to do about it?

Rantalainen: Well maybe it’s better that I leave it unsaid, that there won’t be any misunderstandings.

Announcer: But … Jussi Halla-aho, as an example. Here also in Finland, has now woken up to this debate on Islam by drawing the comparison of it as a pedophile-religion, and all of that.

Announcer: So, the attitude about this issue has become more negative and more hostile.

Rantalainen: Where Halla-aho is concerned– I don’t know if am I the right person to comment about it, as have I but – rumors and hearsay – to rely on, I don’t read his articles. But: if he has –in some way equated Islam with pedophilia or as a pedophile sex religion, or something like that, bring him over here, so once again we can get a bit of, like life, here in the studio, so I can get shook up a bit ..

Announcer: This is precisely what should been realized as having been done. Apparently, he used irony in doing so, but there’s no doubt, however, that Halla-aho was equating Islam as a religion of pedophilia.

Announcer: Which has been presented as being justified.

Rantalainen: If it’s a fact, so hopefully I’ll meet up with this guy sometime.

Announcer: Actually he lives quite near here.

Rantalainen: Give me the address, so I can send the bill…

A dazed and confused Simo Rantalainen