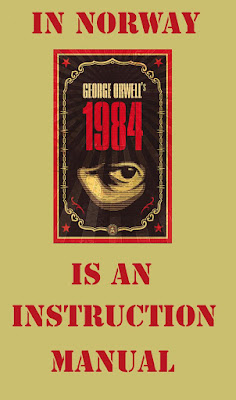 A Tundra Tabloids’ colleague makes the following observation about Norway
One of the conclusions I have come to, after my studies of the current Government and leftist elites of Norway is that they cannot be analyzed with by the normal methods of analysis. You can only deal with them through satire or cabaret. I wonder if even Orwell could have done justice to Norway.

— The queen can visit a mosque where the imam is in favor of suicide bombing.

— The foreign minister will publicly debate with and thus legitimize a Muslim, who says in that debate that he hates Jews and homosexuals. (it was known before that he would say that). The crown prince will sit on the front row to honor this performance even further.

— The King will give personally the highest honor of the country to a man who designs the head of a democratic state as a Nazi.

— The country supports in its aid development program hate propaganda.

— The country divests from Israel, but as our mutual friend has shown, seeks to have its state oil company invest in Turkmenistan, one of the worst dictatorships in the world.

— The minister of finance participates in a rally where there are shouts of death to the Jews and Norway’s ambassador to Israel will call this publicly a worthy demonstration.

Orwell might have said bout Norway: “hate is aid,” “lies are truth” and “cheating is ethics.”

I am not talented enough to have invented this country. I just write down the facts. If Orwell had invented Norway as it is people would have praised his fantasies. This country with its caricatural elites really exists and is called Norway.