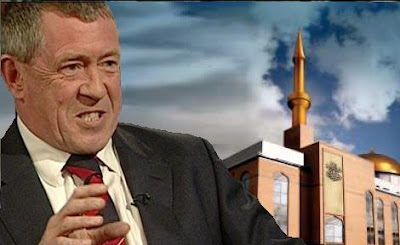 Communities Secretary, John Denham: The Labour Party will ensure that intolerant and
anti-democratic Islam will succeed in Britain…

Only those who oppose their own Islamification and colonization are the racists. Notice that the organizers of the anti-Islamification have made it very clear that they are not against different ethnic groups, but agianst the increasing Islamization of their society. That’s just too much of heavy thought for these dunder heads to ponder, it’s much easier to pawn the whole movement as “miniscule” and “racist fascism”.Don’t be fooled by the little men who hide behind their multi-cultural curtain folks, people upset about Islam, as upset about Islam, not about Indians, Chinese, Arab Christians, Jews or opastate Arabs and Persians from Islam. The Multi-Culti PC elite would have you believe that if all of these Asians and Arabs were Bhuddists, Christians or Jews, there would be a same under swell of resentment against them. It’s a strawman argument.The issue here is Islam, and the politicians turning their blind eye to it, as well as appeasing the intolerance of the vocal members of that community. Such a policy places an unbearable burden on British society as a whole, because it places any modernist Muslim (those who do not place Islam high on their daily agenda) of having to be silent about the increase of traditionalist Islamic views in their community.UK officials, like their US counterparts, have been found repeatedly backing the wrong horse, and yet, they turn a deaf ear to those pointing out the facts and take to calling call them “racists”, while leading imams in over half (that we know of) of Britain’s mosques listen to Islamic hate mongers via sattelite, like Sheik Mohammed Al-Qaradawi. With idiot dhimmis like Nedham running the UK, Britain stands not a chance in defeating its own colonization.Atlas: Of this latest development Fjordman writes, “This proves that there is no longer any legal way in which the natives in Britain, or elsewhere in much of Western Europe, can protest against the Islamization of their countries. I don’t like everything about JFK, but his quote ‘Those who make peaceful revolution impossible will make violent revolution inevitable’ was rather wise. Clearly, the leaders of the British Labour Party haven’t heard this…..”
Labour minister: Anti-Islam extremists no
better than Oswald Mosley’s 1930s fascists

A Cabinet minister has raised fears of a return to 1930s fascism, comparing modern right-wing groups to Oswald Mosley’s Blackshirts.

He singled out protests being organised by the English Defence League, some of which have turned violent over recent months.

Hundreds of supporters are expected to gather in Trafalgar Square tomorrow.

Yesterday protesters from the Stop Islamisation of Europe (SIOE) group were involved in a demonstration outside a mosque in Harrow, north east London, to mark the anniversary of the September 11 attacks. Ten people were arrested.

‘I think that the English Defence League and other organisations are not actually large numbers of people,’ Mr Denham told the Guardian. ‘They clearly, though, have among them people who know what exactly they’re doing.

‘If you look at the types of demonstrations they’ve organised… it looks pretty clear that it’s a tactic designed to provoke and to get a response and hopefully create violence.’