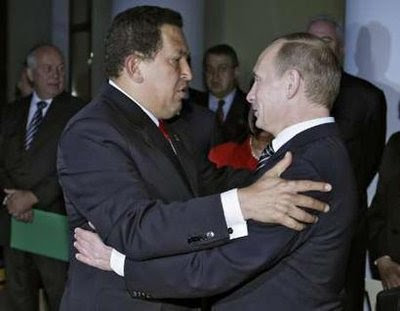 Sure, I’ll use your megalomania
to our best advantage

The Tundra Tabloids has been proved correct once again, in that Russia will refuse any additional sanctions against Iran. Russia is testing US resolve over Iran’s nuclear program, while it’s providing the megalomaniac Fascist dictator, Hugo Chavez, weapons in exchange for a deepening in agreements for the use of Venezuelan waters.
Chavez’s recent recognition of South Ossetia and Abkhazia, the two runaway provences in Georgian republic that were invaded by Russia last year, is just payback for the US’s stripping of Kosovo from the Serbs. The Russians were badly humiliated by that move, and now it’s payback time, especially now, because US resolve under the Obama administration is seen as being weak, very much so, and the Russians are sniffing blood in the water.
Hugo Chavez’s recent delusional gambit in Venzuela’s supplying Iran with gasoline starting this October (20 000 barrels a day), has nothing to do with reality, and everything to do his own megalomania. The whole enterprise is farcical on its face, he is simply unable to do what he’s promised to do, not only due to the nightmare in logistics, but any fuel headed towards Iran must first run through the US, which has the only refineries in the world able to handle Venezuela’s crappy oil, which explains why 70% of its oil exports go to the US.
The TT can only imagine the roaring laughter heard in all of the boardrooms where oil is dicussed upon learning his intentions. But regardless of Chavez’s bloviations and megalomania, the US has other options to reign in Iran, if it chooses to do so, but it has to be done at one petrol refinery at a time, which may be time consuming and difficult to pull off, but it would not involve the UN in any way, which might be the better solution after all. KGS
US and Russia diverge over Iran
US President Barack Obama warned Tehran earlier this year that Washington wanted to see a positive response to its friendlier overtures by the end of September. If not, Mr Obama said the US was prepared to press for new sanctions against Iran. But Mr Lavrov added that he did not think the UN Security Council would support oil sanctions against Iran.

Iran insists its rocket building programme is for satellites”Some of the sanctions under discussion, including oil and oil products, are not a mechanism to force Iran to co-operate, they are a step to a full-blown blockade and I do not think they would be supported at the UN Security Council,” he said.