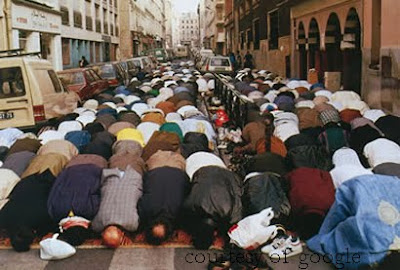 Instead of dancing in the streets,there’s going to be a lot of head banging going down

This is what happens to a continent that exterminates its Jews by the millions, and then imports by the tens of millions, followers of an ideology that’s as anti-Semitic in nature and in deed as National and Communist Socialism ever were. KGS
H/T Reinhard

The immigration revolution:
Europe be the same with different people in it?

Something explosive is about to hit the British political arena, a book with ideas so shocking it will change the debate on the most important issue in European politics.

For years, the European political class have told their peoples that mass immigration was beneficial, inevitable and historically precedented. It enriched our lives, it boosted our economy, it made us better people morally and it was a continuation of our countries’ histories of immigration, and anyone who disagrees is a racist bigot. The ruling class kitted the emperor out in his fancy new clothes and if people could not see them then there was something wrong with their eyes.

Well, the emperor is butt-naked and Financial Times journalist Christopher Caldwell is the little boy. The publication of his book Reflections on the Revolution in Europe is a pivotal moment in the debate on immigration, and it heralds the start of a new era – an acceptance by the political mainstream that our system isn’t working, and that while a multi-racial society can work, the more multi-racial it is the less well it functions.

Caldwell is a reasonable, moderate man who has studied Europe and Islam for a decade, which makes his conclusions all the more astonishing. He argues that mass immigration and the formation of large ethnic bodies makes us unhappier as people, it damages rather than helps the economy, and threatens the basic principles of freedom. Most alarming of all, he shows just how deluded are those liberal thinkers who believe large Muslim immigrant communities can be assimilated into Europe, especially a hedonistic atheist Europe which has recently adopted values at odds with the rest of humanity.

Immigration of the sort we’ve had since the war is simply unprecedented. Part of the propaganda pumped out by the establishment is that Britain is a nation of immigrants. But, as Calwell writes: “Aside from the invasions of Angles, Saxons, and Jutes that started in the fourth century AD – and which brought, at the very most, 250,000 new settlers over a period of several centuries – British ’stock’ has changed little. Only about 10,000 people arrived with the Norman Conquest. Tens of thousands more Huguenots came after the revocation of the Edict of Nantes in 1685. But, all told, three-quarters of the ancestors of contemporary Britons and Irish were already present in the British Isles 7,500 years ago. DNA from people who arrived after that makes up only 12 per cent of the Irish gene pool.”

In fact before 1945 there had only been one example of such immigration in Europe’s history and that was, ironically, produced by Nazi Germany.Read it all.