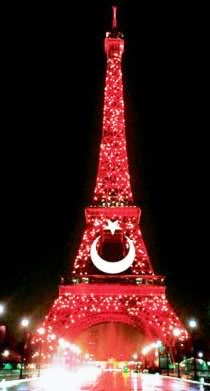 Turkish genocide of Armenians to be followed
with the Turks cultural genocide of France
We live in dangerous times. As the US struggles with the most radical socialist government in the history of its nation, the Europeans are busy dragging themselves down into cultural oblivion. Don’t let it happen, fight back, pick up a pen and write the French Ministry of Culture, Frédéric Mitterand. How to take part in the French SITA letter writing campaign, is available in the bottom of the post. KGS
The Eiffel Tower Welcomes Turkey

Europe News: “They’re all talking about this – the Eiffel Tower will be ablaze in red and white to honor Turkey starting in October. It’s all part of a nine-month-long celebration of Turkey, called “La Saison de la Turquie”, offered by France to the country Nicolas Sarkozy most wants to see in the European Union, despite his protests to the contrary. The celebration, about which I have already posted one article, began on June 30 and goes on until the end of March 2010. Bivouac-Id reports”:

Launched on June 30 at the Ministry of Culture and Communication in the presence of Frédéric Mitterand and Ertugrul Günay, ministers of Culture of France and Turkey respectively, La Saison de la Turquie is off and running. A foretaste of what France is predictably in store for if the actual accession of Turkey to the European Union becomes reality. How else can we explain the profusion of grandiose programs dedicated to Turkish culture, if not as an overt acquiescence to Turkish membership? And it is on the occasion of this celebration of Turkey that the Eiffel Tower will be lit up with the colors of the Turkish flag in October. That’s right. The Eiffel Tower will be adorned with the white star and crescent on a red background. Turkey will have, in fact, one foot in Europe. And the mayor of Paris will roll out the red carpet.Frédéric Mitterand, Minister of Culture, acknowledges this and has given his blessing to such a sacrilege. The question of Turkey’s accession to the EU has not been decided. However, that of Turkey in France is off to a good start: until March 31, 2010, no fewer than 400 cultural events are programmed, under the aegis of the Foreign Ministry and the French and Turkish Ministries of Culture.However, some voices can be heard here and there in protest against the desecration of the Eiffel Tower by Islamo-Turkish symbols. First, an action from SITA, that we urge you to participate in. Second, there is the initiative by Armenian militants who have also launched their own campaign “against the colors of the Turkish flag on the Eiffel Tower.”At this point the author provides a link to a French-language Armenian website, Armennews, that has posted a sample letter to the mayor of Paris. Those French readers who are interested can copy the letter, or write one of their own. The middle section of the letter reads:(…) In truth, Turkey denies its responsibility in the perpetration and execution of several crimes against humanity – the Armenian Genocide (1,500,000 deaths), the Aramaean Genocide (1,000,000 deaths), the Greek Genocide (500,000 deaths), and the Assyro-Chaldean Genocide (250,000 deaths) – and adapts its foreign policy through negationist rhetoric on a planetary scale and through threats of diplomatic and economic reprisals against any State that debates the issue of recognition of one of these genocides. Moreover, Turkey refuses to recognize Cyprus, a member State of the EU that has been occupied by Turkey since 1974, in flagrant violation of International Law. Finally, I cannot hide from you the fact that the illumination in the colors of the Turkish flag of the most symbolic of all French monuments has aroused strong reactions both in France and abroad. (…)Note: The Aramaean Genocide, also called the Assyrian Genocide, is a complicated story unto itself. Wikipedia has this page of information, but the topic warrants much research. The Assyro-Chaldean Genocide, referred to in the letter above, does not appear to be separate from the larger topic of the Assyrian Genocide, except possibly from a geographical point of view. Time does not permit me to research these important points right now. Here is another Wikipedia page on Genocides In History, where the definition of what actually constitutes a genocide is discussed, though the question is hardly resolved.Finally, it’s interesting to note that even though Serge Sarkisian, president of Armenia, insists on the importance of Turkish recognition of the genocide, he is realistic enough to acknowledge that it may not happen:”(…) We say, yes, there was a genocide and it matters very little whether or not Turkey admits it. It is a fact recognized by all the experts on genocide in the world; it is recognized by many countries throughout the world.”If you are interested in the SITA action against the Eiffel Tower display, there is another sample letter posted here, which is very similar to the letter posted at Armennews, EXCEPT that it is addressed to Frédéric Mitterand instead of to the mayor of Paris, AND the figures on the number of deaths in the various genocides are different. Since I cannot sort this out, I recommend you simplify the letter and omit the figures, or use the figures you feel most comfortable with.On several occasions in the past I have conveyed to readers the general rules for a SITA action. The ground rules (in English) can be reviewed here.