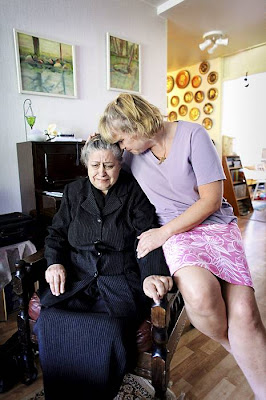 The Finnish state rules to deport a Coptic Christian grandmother like, Eveline Fadayel, but imports Muslims by the thousands

YLE: The controversial decision to deport an Egyptian grandmother from Finland has been upheld by the Helsinki Administrative Court. The court’s decision is in line with the policy of the Finnish Immigration Service.
The court ruled that the family ties between 64-year-old Eveline Fadayel and her relatives constituted insufficient grounds for granting a residence permit. Under current law, a foreign elderly relative must be totally dependent on her family to be allowed to stay in Finland.
Fadayel has lived in Vantaa with her sons for two years. The woman’s sons and grandsons are Finnish citizens. She was denied a residence permit because grandparents are not considered as part of the nuclear family in Finland.
The Administrative Court declared its decision as classified.
Authorities handed the Egyptian grandmother a deportation order this summer. The Helsinki District Court granted a stay on implementation of the order until September.
Fadayel’s family members in Finland say she is unable to live on her own in Egypt, where she has no relatives. As a Coptic Christian, she also faces persecution there.

Insanity breeding more insanity: How many multiple wives in Islamic marriages are allowed to stay put here in Finland? Are they considered “part of the nuclear family” under Finnish law? Let me guess, the lawmakers and the courts are looking through their crooked fingers at that, but a hapless Coptic Egyptian gradmother is a problem for the state.The Finnish state broadcastor YLE, hypes the feely-good, doughy headed, multi-culti phenomenon taking place inside the nation’s capital of Helsinki. The Finnish capital is slowly but surely going halal, gee, how wonderful is that!? 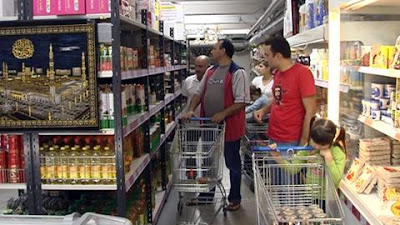 NOTE: Take notice of the man sporting the red “Che” shirt. An ‘ROP’ fellow traveler and admirer of a cold blooded murderer. Now why does that not surprise?
Muslim Consumers Boost Immigrant Businesses in Finland

More and more immigrants are establishing small businesses in Finland. Immigrants make up a third of clients at Helsinki City’s business counselling centres. Today services and products aimed at Muslims are especially poised for growth. The selection of ethnic products in Finland is becoming increasingly diverse. The product offerings at Helsinki’s ethnic shops have grown manifold in the past few years. In addition to foodstuffs, shoppers can now find clothing and home furnishings from far-away lands. “I usually do my shopping at Finnish stores. But I shop at ethnic markets when I’m in the mood for something special,” says Mohamed Hassanein. Immigrants have started some 6,500 businesses in Finland. More than half of these are located in the capital city region. A growing immigrant population and Finns’ appreciation of exotic tastes are fuelling the business of ethnic shops. Muslims for example seek out foods that adhere to Islamic dietary restrictions. Growing Muslim Market Muslims are a fast-growing consumer group. Globally, products and services aimed at Muslims are big business. Afghan-born celebrity make-up artist Matin Maulawizada is the founder of Afghan Hands, an organisation which sells hand-embroidered shawls made by Afghan widows. He says marketers are finally connecting with Muslim consumers. “The most amazing thing is that you see designers designing head scarves and outer coverings for Muslim women. We are talking about big French designers who display these garments in their boutique windows,” says Maulawizada, who recently visited Finland. For the moment, however, food products are the most sought-after items among Finland’s Muslim population of 40,000.

If Finland doesn’t change course, it’s the beginning of the end for the Finnish state. KGS