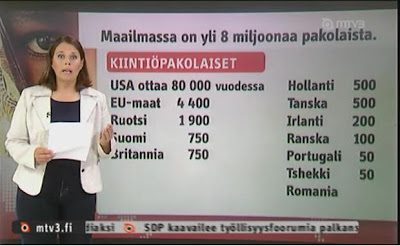 MTV3: “EU is not forcing its way, just strongly urging it”NOTE: [The number of “8 million” refugees is highly inflated, when one considers that it includes the 4+ million fake refugees called the Palestinians. Their actual number hovers around 200 000, the rest are just relatives and distant kin to the remaining number of actual Arab refugees that left their homes for a number of reasons.]Watching last nights news on TV, it was interesting to hear the EU’s official policy on getting its member states to increase their quota of refugees they take in yearly. Really, it was quite an amazing appeal by MTV3, the ‘report’ carried with it the same feel of a Jerry Lewis telethon. But not all are buying it, like for example, Minister of Trade and Development, Paavo Väyrynen, who stated on the same station’s morning channel that: 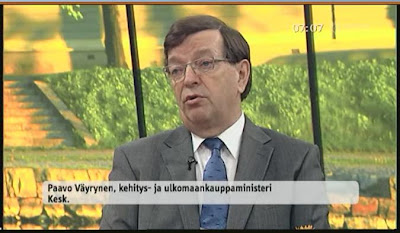 Paavo Väyrynen: Finland has a different interpretation of immigration than other member states. We have received a great number of wrongful applications for refugee status, and since there has been these wrongful expenditures, the Ministry of the Interior plans to count these funds, even more so than before, as a part of developmental aid.MTV3: Well in practice, can’t this be understood that you believe that too many refugee applicants are coming to Finland?Paavo Väyrynen: Yes. The whole government last Spring looked at it in that way, that there were too many false applicants, who have no excuse for coming here and have created financial burdens. The Finnish policies are too slack.MTV3: In the newspaper Aamulehti, the whole front page was about the EU pressuring member states to increase the fixed number of refugees, what do you say about that?Paavo Väyrynen: You can say that pressure on Finland will grow to increase the fixed number of refugees, and it’s an incredible claim to say that most EU member states don’t have a fixed number for refugees. Finland’s fixed number of 750 refugees a year is one of the highest in the EU when calculated proportionally, so we don’t have any reason to increase the fixed number of refugees, on the contrary, the fixed number should be reduced, then it would be in line with other EU countries.MTV3: How much of aid is really for humanitarian reasons, caring for the needs of others?Paavo Väyrynen: Some look at this as “some kind of social welfare that goes on endlessly”, in my opinion, the right understanding is for a lasting development that lifts people from poverty that will eliminate the need for this kind of aid.

Sanity found in the ranks of the Central Party. KGSNOTE: Contrary to what the MTV report stated, it is indeed a matter of sovereignty to determine who, and from where, and how many, will enter the borders of the state. This recent initiative by Brussels should be viewed in light of its traditional strong arm tactics to get the member states to come into step with the offical line. So MTV3’s ‘assurances’ need to be taken with a grain of salt.
Britain must take more war refugees as
Brussels wants us to open the doors to thousands

Britain will be asked to accept thousands more refugees a year as part of moves by Brussels towards a single immigration and asylum policy across the EU.

Many will come from war zones such as Somalia and Sudan under plans for a ‘Joint EU Resettlement Programme’.

In an attempt to reduce public concern about the cost, Britain will be offered 4,000 euros (£3,500) for every refugee it accepts.

The project, launched by European Commission vice-president Jacques Barrot yesterday, is widely seen as the first part of a Brussels blueprint to roll out a common immigration and asylum policy across the EU.

Later this month the Commission will publish plans for immigration ‘burden sharing’, which could see asylum seekers who land in EU countries such as Italy and Malta moved to the UK.

A spokesman said yesterday that this was a ‘pressing issue’ for the EU.

Conservative immigration spokesman Damian Green last night said it was vital that the UK kept control of the total number of immigrants entering the country, rather than handing power to Brussels.

He said co- operation on dealing with refugees should depend on other EU countries helping to stop the flow of illegal immigrants to Britain.

Mr Green said: ‘There is nothing wrong with trying to plan the numbers of successful refugees – anything would be better than the chaos Britain’s system has suffered in recent years.

‘But Britain could only take part if we had control of the numbers arriving here under the scheme, and if other countries co-operate more in preventing the build-up of asylum seekers at Calais.’

He added: ‘Asylum policy is a sensitive issue for the public and national governments therefore need to be clear and open about where EU asylum policy is heading in order to avoid a backlash from their citizens.’

Britain is one of only ten EU countries to operate a formal refugee resettlement programme.

Over the past five years the UK has accepted 2,500 refugees on top of the number coming in through the wider immigration and asylum system