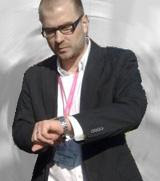 Phil Schwarzmann: I haven’t the time to really think about it
Halla-aho wrote about Somalis and immigration
so that makes him a ‘waycist’ in my opinion
Fellow Finnish blogger, Vasarahammer, informed the Tundra Tabloids last Friday about a post at the blog, Finland for Thought, concerning Helsinki City Councilman, Jussi Halla-aho, and the Finnish state’s prosecution of him in court last week over a post he published on his blog Scripta. The Tundra Tabloids has had contact with Shwarzmann over the years, and as a fellow blogger, thinking that it would be at least courteous to contact him before publishing this post, I tried to contact him. Well, Shwarzmann dodged all of my calls and text messages over the weekend, so there’s no point holding off any longer from writing about what he wrote.Shwarzmann’s hit piece against Halla-aho is highly superficial, he clearly shows that he fails to grasp the hard-hitting logic behind Halla-aho’s writings. I can’t say for sure whether the man understands Finnish or not, but the translation of the “offending post” is very accurate, so there’s no misunderstanding what Halla-aho wrote. The “offending post”, out of the hundreds of posts published by Halla-aho at his Scripta blog, “A Few Baits for Mika Illman“, has to be one of the more excellent written texts that highlights the absurdity of the Finnish state’s inherent bias towards its own people. In fact, it serves to highlight the Finnish state’s own deeply instilled humanitarian racism towards immigrants.By treating the Finnish minority differently than it treats the majority, (one may say absurd things about ethnic Finns, but not about immigrants) the state is by default insisting that minorities are somehow less than that of a Finn. It’s a racism in reverse which reeks of hypocrisy. The hypocrisy of the Finnish state’s actions is what the Helsinki city councilman was pointing his finger at, with his post, “A Couple of Baits for Mika Illman”. Illman is a state prosecutor that’s been clamping down on the Finnish blogosphere and free speech rights.The TT understands why the Finnish state in purposefully misreading Jussi Halla-aho’s writings on his Scripta blog, they have an agenda to quash active debate about its immigration policies, but why is a self proclaimed Libertarian doing the same? There must be something more at play here, it just does not add up. So I lay the challenge to Mr.Shwarzmann himself, to either “put up or shut up”, concerning Jussi’s post and give a detailed accounting on how, after reading the whole post, which means not taking anything out of context, he came to the conclusion that Jussi is a “racist”. That’s the challenge, and let the blogosphere handle the rest. I predict silence from Shwarzmann, followed by more childish postings about Halla-aho that reflect both his deep seated animosity towards Europe and Finland in general, as well as his stubborn anti-intellectualism. KGSNote: This is Shwarzmann’s foray into the realm of debate on Islam: ” The “Muslim religion”, all religions are equally silly IMO.” The man is totally clueless. Equally silly indeed.