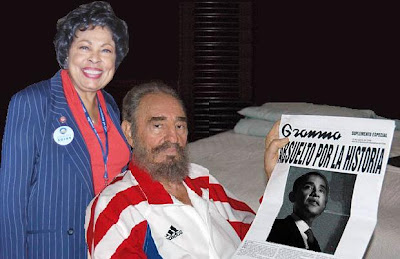 The woman is a disgrace to the flag she supposedly represents. Front Page Mag’s Jamie Glazov lets the tryant lover have it with both barrels, as he exposes the nonsense Diane Watson pimps to the American public on the behalf of the Cuban dictator. Read on. KGS
A Congresswoman’s Romance with Fidel

The Left’s romance with tyranny and terror continues.
This time it is Democrat Rep. Diane Watson picking up the torch for the fellow travelers, lavishing praise on Fidel Castro.
Watson, evidently, is still riding the wave of ecstasy she experienced upon prostrating herself before Fidel Castro on her political pilgrimage to the dictator’s slave camp in April, 2009. Now, in a recent town hall meeting on health care, she’s touching base with the feelings of euphoria she experienced on her totalitarian odyssey.
Watson heaped adulation upon Fidel Castro, his blood-drenched revolution and his atrocious health care system, adding that opponents of health care reform in the U.S. were trying to destroy a president “who looks like me.” [To watch a clip of the video, click here]
“You can think whatever you want to about Fidel Castro,” she affirmed, “but he was one of the brightest leaders I have ever met.”
Fidel Castro is one of the “brightest” leaders, mind you, that heads one of the most racist regimes in the world and that oppresses, deliberately, people who “look like” Watson. Indeed, as author Humberto Fontova has documented, the Castro regime is notorious for its atrocious oppression of black people; systematic racism against blacks is one of the cornerstones of the regime.
But Watson is, obviously, as a leftist African-American, not interested in the fate of oppressed black people under a communist regime. Because, as a member of the political faith, her priority is to demonize her own democratic society. And so her compliments for a mass murderer and oppressor of black people are perfectly in line with leftists’ long tradition of praising tyrants such as Stalin, Mao, and the North Vietnamese butchers. It’s a dreadful and shameful phenomenon documented by sociologists such as Paul Hollander.
And so, like all fellow travelers, Watson found paradise when she arrived at her totalitarian destination, and the despot in charge became her own personal deity. So it’s completely understandable why, at the recent town hall meeting on health care, she affirmed:
“And you know, the Cuban revolution that kicked out the wealthy, Che Guevara did that, and then, after they took over, they went out among the population to find someone who could lead this new nation, and they found…well, just leave it there (laughs), an attorney by the name of Fidel Castro..”
There is, of course, a little technical error here: the Castro revolution did not “kick out” the “wealthy.” No one got “kicked out.” They were executed. Castro’s revolution executed thousands of innocent Cubans whom it labeled as a class enemies. And this mass murder was part of Castro’s achievement in constructing one of the most evil and barbaric regimes that ever prevailed on the planet — a fact documented by Humberto Fontova’s Fidel: Hollywood’s Favorite Tyrant.
Ever since the revolution, Cuba has distinguished itself as one of the most monstrous human-rights abusers in the world. Half a million human beings have passed through Cuba’s Gulag. Since Cuba’s total population is only around eleven million, that gives Castro’s despotism the highest political incarceration rate per capita on earth. There have been more than fifteen thousand executions by firing squad.
Torture has been institutionalized; myriad human-rights organizations have documented the regime’s use of electric shock, dark coffin-sized isolation cells, and beatings to punish “anti-socialist elements.” [1] The Castro regime’s barbarity is best epitomized by the Camilo Cienfuegos plan, the program of horrors followed in the forced-labor camp on the Isle of Pines. Forced to work almost naked, prisoners were made to cut grass with their teeth and to sit in latrine trenches for long periods of time. [2] Torture is routine.
The horrifying experience of Armando Valladares, a Cuban poet who endured twenty-two years of torture and imprisonment for merely raising the issue of freedom, is a testament to the regime’s barbarity. Valladares’s memoir, Against All Hope, serves as Cuba’s version of Solzhenitsyn’s Gulag Archipelago. Valladares recounts how prisoners were beaten with bayonets, electric cables, and truncheons. He tells how he and other prisoners were forced to take “baths” in human feces and urine.
But Diane Watson is, obviously, not interested in these particular details. She’s not interested in the hundreds of prisoners of conscience who continue to rot in Cuba’s Gulag. She’s not interested in the atrocious human rights abuses perpetrated by the communist regime. Nor is she interested in the fact that Cubans continue to be deprived of the rights that have allowed her to become a Congresswoman, rights which include the right to free speech, free elections and freedom of religion.
Watson is interested primarily in contributing to the long record of Western leftists showering adulation upon the Castro regime – a regime that has distinguished itself for its tenacious commitment to inhumanity, oppression, racism and death.
Notes:
[1] For one of the best accounts of the brutality of the Castro regime, see Pascal Fontaine, “Cuba: Interminable Totalitarianism in the Tropics,” in Courtois et al., The Black Book of Communism, pp. 647–665.
[2] Ibid., p. 657.Editor’s note: Get the whole story of the Left’s love affair with Castro in Jamie Glazov’s new book, “United in Hate: The Left’s Romance With Tyranny and Terror.”