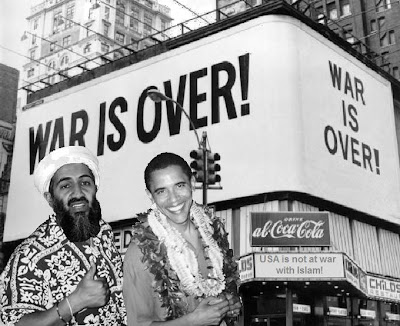 The Tundra Tabloids suggests that al-Qaida’s Noor Mohammad Top get in touch with his higher command, and learn what US president B.Hussein Obama has been saying for some time now, that the US will never be at war with Islam. To be fair, GWBush -though he used the term Islamofascism- pretty much held to the same dogma as Obama, that Islam is a religion of peace.Investigations have revealed that one of the world’s most slippery Islamic Jihadi terrorists, Noor Mohammed Top, had planned to assassinate the US president during his visit to Indonesia, which greatly pisses off the TT, which longs to see this terrorist either brought to justice or permanently in the ground. No one targets a US president for murder and should be allowed to get away with it. That said, it pretty much makes a joke of the “we are not at war with Islam” meme, that both administrations have been pushing since day one after 9/11, in which 19 pious Muslims hijacked four planes and successfully plowed three of the four into US civilian and government buildings.This nonsense approach to Islam by successive US administrations, is not only counterproductive, it’s a fool’s errand. Such thinking dismisses the root of the ideology that is the driving force behind the international terrorism being committed by all the various jihadi groups, waging war against the infidel under the pirate flag of al-Qaida. It as if present day US politicians on both sides of the aisle, actually believe that Ronald Reagan wasn’t really against Communism for fear of alienating all the world’s socialists. KGS
Indonesia: Militants Plotted To Assassinate Obama
August 20, 2009
An investigation of the July Jakarta hotel bombings revealed that militants also planned to attack U.S. President Barack Obama’s convoy when he visits Indonesia, Reuters reported Aug. 20, citing Dynno Chressbon, an intelligence analyst at the Center for Intelligence and National Security. Two of the wanted suspects had been trained as snipers to attack Obama. The suspects were from a group called the Indonesian Islamic State, which has received support from a group headed by Noordin Mohammad Top, Chressbon said. The militants held an April meeting where they discussed attacking other possible targets in Jakarta in addition to the luxury hotels, Chressbon said.