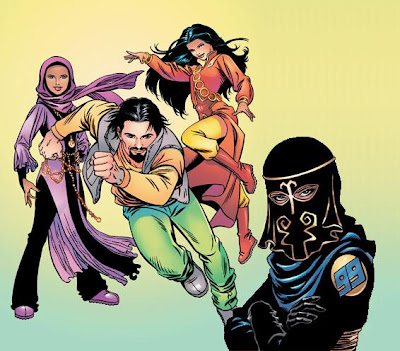 The 99The should actually be deemed as arch-enemies of the Marvel Comics Heroes and have the living stuffing kicked out of them. But no, the Western comic maker,DC, is going to do a deal with them, by allowing them to join forces with the Justice League.Next thing you’ll hear is that the JL is going to full court sharia, and kick Superman out for being a Jew. They are all ready wondering what to do about Wonder Woman and her tight suit, more than likley she’ll be penciled in with a burka like the creators of The 99 did with one of their main super heroes, “Battina-The-Hidden”, pictured above.Either way, Muslims and multiculturalists are having another go at our young, in trying to condition them as interpreting burkas and hijabs in a positive way, and believing in the myth that “we’re all just one big family”. Yeah riiiiiight. KGSNOTE: Wiki: The concept of The 99 is based on the 99 attributes of Allah.
Via: Vlad Tepes

Jabbar, is one of The 99, the world’s first Muslim cartoon superheroes Named the 99, as each possesses one of Allah’s 99 attributes, the characters include a burka-clad woman named Batina the Hidden and a Saudi Arabian Hulk-type man named Jabbar the Powerful.

They have proved a hit from Morocco to Indonesia and were recently named as one of the top 20 trends sweeping the world by Forbes magazine.

Now they are being brought to British television by Endemol, the production company behind Big Brother, with a mission to instill Islamic values in children across all faiths.

Until now, the superhero market has been dominated by the likes of Batman, Spiderman and Superman who have typically limited their crime-fighting abilities to America and the Western world.

They were created by Dr Naif al-Mutawa, a clinical psychologist from Kuwait, who felt Muslim children needed a new set of heroes to look up to, to counter jihadist role models.

“It hit me that the stories I was hearing were from men who grew up believing that their leader, Saddam, was a hero, a role model — only to one day be tortured by him,” he told The Times. “I decided the Arab world needed better role models.”

However, despite being called the 99, there will never be a full cast of 99 superheroes since it is forbidden to depict all Allah’s attributes

Dr al-Mutawa hopes the cartoons will have a universal appeal.

He said: “It is based on attributes such as generosity and mercy. These are not things that Islam has a monopoly over.”