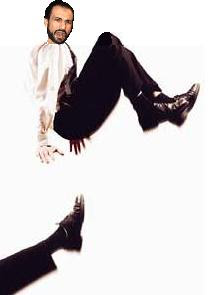 Tariq Ramadan: Hey!
I don’t actually support the Iranian regime,
I just happened to get paid by them, that’s all

HAHAHAHAHAHA ! Lying to the very end. Just deserts for the Muslim Brotherhood front man. Getting rid of this guy is good news, it also helps to highlight the fact that he maintains contacts with nefarious groups. The man is a habitual liar and con man for the gobal jihad. Removing him from his teaching position, which he should never have been offered in the first place, is just a correction of a past error. So long Tariq, don’t let the door hit ya, where your moon god split ya! KGS

Tariq Ramadan Gets the Sack

“Rotterdam fires me out of fear of Wilders”

According to the Islamic scientist Tariq Ramadan, his resignation as adviser to the city of Rotterdam is part of a hunt against prominent intellectuals. “The city council is just afraid of Geert Wilders. By sacking me they try to get rid of Islam,” said Ramadan, who officially still knows nothing of it. The contract with Ramadan will be dissolved on November 1, because he refuses to stop his work for the Iranian Press TV, as has been announced during a press conference.

According to Alderman Rik Gras Hoff (GreenLeft), Ramadan lacks a sense of urgency. He did not foresee how sensitive his work for Press TV was. On such fundamental considerations, a contract may be canceled. Both at the Erasmus University in Rotterdam and with the municipality of Rotterdam, Ramadan loses his job on November 1st.

Ramadan was fired today by the Rotterdam city council because he discredited himself with a TV program he made for the Iranian government’s Press TV (a discussion program on Islam).

According to the controversial Islamic scientist, who also lost his job as professor at the Erasmus University Rotterdam, his resignation has nothing to do with his activities for the controversial TV channel, but more with the emergence of Wilders.

“At the European elections Wilders with his PVV was the strongest in Rotterdam. That’s what they are afraid of in the city council: the growth of the PVV.” Ramadan is very concerned about the political climate in the Netherlands. “They pick on prominent intellectuals such as myself, to get rid of Islam.”

The Swiss Egyptian will let it not be: “This is a matter of honor and dignity. This I won’t accept, I will take it to court. I am not angry, but you do not treat your employees like this. They have not even called me!” Exactly what kind of legal action he will take, Ramadan, who still has a contract until 2011, does not know yet.

About his work at Press TV, which caused his resignation, he says: “It has nothing to do with the support of the Iranian regime. I thought carefully for three months to reflect on the choice to work for them. I have a completely independent program.”

Had he ever been able to express criticism of the corrupt regime on that channel? “No, because I created a program about religion, not politics,” Ramadan concludes, who was tasked as an integration bridge builder by Rotterdam.