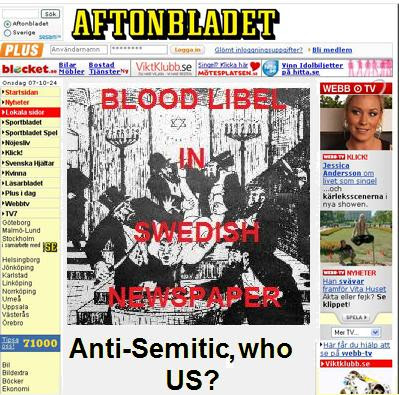 In the Swedish press, anti-Semitism is a hobbyUPDATE: Pamela Geller at Atlas Shrugs links to the TT’s story. Scroll down for additional info. KGS
This is the lowest of the low. The anti-Israel Swedish newspaper, Aftonbladet, is at it again, this time around they dip deep into the well of anti-Semitism and accuse Israelis of profiting from Palestinian organs. Remember folks, all an Arab has to do is to make a claim against Jews/Israel for the media to pick it up, their own anti-Semitism takes care of the rest. KGSUPDATE: The TT’s Swedish source, Reinhard, says this about the Swedish Aftonbladet’s journalist: “Boström edited Salam, a book about “Islam’s message of peace” featuring a bunch of Muslim and pro-Muslim activists who tried to explain why Islam really is a peaceful religion. Most of them were straight taqqiyah pieces, and the rest were all about Israel. So he’s dedicated.H/T Ted Ekeroth

[Rubin:We are not talking about a Saudi newspaper or Hamas radio station but a Swedish newspaper. We are not talking about a neo-Nazi rag but a daily closely tied to the Swedish Social Democratic Party. And we are not just talking about an obscure item but an article that received top billing. What does this incident tell us? One thing is that there is no limit to the insanity of how Israel is treated nowadays in supposedly responsible, left-wing, and intellectual circles. It also tells us that anyone of decency and good intentions should start re-examining right now their credulity in accepting anti-Israel slanders, nonsensical media or academic claims, or irresponsibly inaccurate “human rights” group reports.It also tells us that Jews who criticize Israel based on what they are being taught at universities and what they see in the media need to think about what they are doing. And, yes, all this bashing and chipping away at Israel’s reputation, this unfair blaming, this blindness toward radical Islamist forces and Palestinian intransigence is promoting an antisemitism beyond anything seen in the Western world since 1945.The time has come to realize that antisemitism, anti-Zionism, absurd misrepresentation of Israel and the effort to wipe it off the map are all tightly intertwined. ]Top Sweden newspaper says
IDF kills Palestinians for their organs

A leading Swedish newspaper reported this week that Israeli soldiers are abducting Palestinians in order to steal their organs, a claim that prompted furious condemnation and accusations of anti-Semitic blood libel from a rival publication.

“They plunder the organs of our sons,” read the headline in Sweden’s largest daily newspaper, the left-leaning Aftonbladet, which devoted a double spread in its cultural section to the article.

The report quotes Palestinian claims that young men from the West Bank and Gaza Strip had been seized by the Israel Defense Forces, and their bodies returned to the families with missing organs.

“‘Our sons are used as involuntary organ donors,’ relatives of Khaled from Nablus said to me, as did the mother of Raed from Jenin as well as the uncles of Machmod and Nafes from Gaza, who all had disappeared for a few days and returned by night, dead and autopsied,” writes author Donald Boström in his report.

Boström’s article makes a link to the recent exposure of an alleged crime syndicate in New Jersey. The syndicate includes several American rabbis, and one Levy Izhak Rosenbaum, who faces charges of conspiring to broker the sale of a human kidney for a transplant.

Boström also cites an incident of alleged organ snatching from 1992, during the time of the first Palestinian intifada. He says that the IDF seized a young man known for throwing stones at Israeli troops in the Nablus area, who was shot in the chest, both legs, and the stomach before being taken to a military helicopter which transported him to “a place unknown to his loved ones”.

“The sharp sounds from the shovels were mixed with the occasional laughter from the soldiers who were joking with each other, waiting to go home. When Bilal was put into his grave, his chest was revealed and suddenly it became clear to the present what abuse he had been put through. Bilal was far from the only one who was buried cut-up from his stomach to his chin and the speculations about the reason why had already started,” he writes.

But the liberal Sydsvenskan – southern Sweden’s major daily – had harsh criticism for the rival paper, running an opinion piece under the headline “Antisemitbladet” (a play on the name Aftonbladet).

“We have heard the story before, in one form or the other. It follows the traditional pattern of conspiracy theory: a great number of loose threads that the theorist tempts the reader to tie into a neat knot without having been provided with any proven connection whatsoever,” writes leading columnist Mats Skogkär of Sydsvenskan.

“Whispers in the dark. Anonymous sources. Rumors. That is all it takes. After all we all know what they [the Jews] are like, don’t we: inhuman, hardened. Capable of anything,” the opinion piece says. “Now all that remains is the defense, equally predictable: ‘Anti-Semitism’ No, no, just criticism of Israel.”

The Foreign Ministry reacted angrily on Tuesday to the report. Ministry spokesperson Yigal Palmor said the newspaper’s decision to publish the story is “a mark of disgrace” for the Swedish press.

“In a democratic country, there should be no place for dark blood libels out of the Middle Ages of this type,” Palmor said. “This is an article that shames Swedish democracy and the entire Swedish press.”

A Foreign Ministry official said that Israel’s embassy in Stockholm have communicated a harsh condemnation to the Swedish government and the newspaper itself.

Anna Ekström and Mikael Tossavainen contributed to this report

UPDATE: Pamela supplies more info, this time from the J’lem PostIsrael aghast at Swedish report on IDF The Jerusalem Post
The Foreign Ministry responded furiously on Tuesday to a story in Sweden’s largest circulation daily, Aftonbladet, that accused IDF soldiers of abducting Palestinians to steal their organs, saying this was a grotesque throwback to the blood libels of the Middle Ages. Foreign Ministry spokesman Yigal Palmor characterized the story as “racist hysteria at its worst.” “No one should tolerate such a demonizing piece of medieval blood libel that surely encourages hate crimes against Jews,” Palmor said. “This is a shame to freedom of expression, and all Swedes should reject it unconditionally.” Israel’s embassy in Stockholm was expected to issue a sharp denunciation. In the story, headlined “They plunder the organs of our sons,” and accompanied by a gruesome photograph, Palestinians are quoted as saying IDF soldiers kidnapped their sons and stole organs.
Atlas: Only savages could projectile vomit such bile. Haaretz quoted Donald Bostrom as writing the following: “‘Our sons are used as involuntary organ donors,’ relatives of Khaled from Nablus said to me, as did the mother of Raed from Jenin, as well as the uncles of Machmod and Nafes from Gaza, who all had disappeared for a few days and returned by night, dead and autopsied.” The article makes reference to the recent arrests in New Jersey of several US Jews, including rabbis, for a number of alleged crimes, including brokering the sale of organs for transplant.
The story also cites allegations of similar instances of organ-snatching in 1992, during the first intifada.