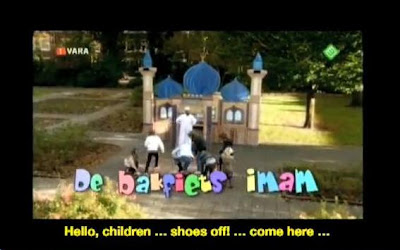 The TT has been discussing with Vlad Tepes about the character and the true aim behind the videos. It now appears that the vids are an attempt to pull off what former Taxi star (Latka) Andy Kaufman did as “Tony Clifton“, the audience-abusing lounge singer. In other words, the Imam is pretending to be something that he’s not, an Imam supposedly preaching about Islam to a children.The Tundra Tabloids felt initially that the comedian had crossed the lines in the first vid, from comedy to actually preaching Islam. But as the other videos show, he’s actually doing a parody of Islam, by showing what Islam has come to stand for, and believing that they are selling points for proselytizing the un-believer. so the TT stands corrected for the initial “knee-jerk” reaction, but can also be excused for doing so, due to the first video not being as clear of its intention as the following videos. They are actually quite funny, and on target.2# Cargo-Bike Imam: Education

Vlad Tepes: This is some creepy ass TV out of Holland. Not sure if it is funny or is meant to be funny or what. Seems sort of like Sasha Baron Cohen meets Andy Kaufman if he was a Moroccan Muslim living in Holland. Best of luck watching this.
Tundra Tabloids: With only three of the 8-9 videos transcribed…it’s really any ones guess what the over all intention is, but video 2&3 are actually funny, with kids pictured as being given pictures of Islamic atrocities to take home and to color, as if these will be the selling points on the way to their eventually becoming Muslims. It’s a mixture of parody, black humor and a mocking of Islam. At least that’s the TT’s reaction after watching the other two vids.The TT actually is excited to see what the rest of cargo-bike Imam episodes are like, it’s kind of like waiting for the Gates of Vienna’s “this week’s “Nazi of the week. The TT’s fingers are all a tingle. KGS