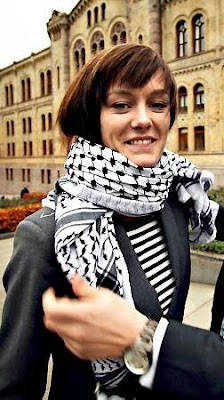 Anette Trettebergstuen:
I’m a gay secular politician who’spissed off for being outed for
supporting homophobes, racists and religious supremacists

So the obvious culprit for such an outing must be an Israeli newspaper right? Wrong. The Norway, Israel and the jews blog gives the Tundra Tabloids the heads up on the following (brewing) brouhaha over the bloggers outing of the already openly gay politician concerning her open support for the openly anti-Gay Palestinians.Because she can’t handle the gross contradiction of her actions, she takes to blaming the blogger who wrote about her buffoonery, as being an Israeli newspaper….as if that’s enough to squelch the claims…because it’s an ”Israeli”, though in reality it’s just a sane Norwegian blogger writing about the lunacy in his home state that passes for normal political activity.

Check it out, and don’t hold back the laughter for a moment, let it all out. Remember, this is a Norwegian Leftist homosexual women who’s pulling for the homophobes in the disputed territories to win, though they persecute her fellow gay Arabs and that the only safe havens available for persecuted Gays…..are in Israel. KGS
Facebook: Trettebergstuen and
the non-existent “Israeli newspaper”

Oh yes. Yet it is exactly this which has happened, except the other way around.

Yesterday Labor parlamentarian Annette Trettebergstuen read this post, here on NIJ. The post questions how Trettebergstuen, a secular, female homosexual, can single out for criticism the one state in the Middle East which is the most tolerant of secular, female homosexuals like herself. Unfortunately Trettebergstuen’s interpretation of the post led her to conclude that some “Israeli newspaper” was slamming her for her sexual preferences. Subsequently the politician proceeded to post her thoughts on the matter on Twitter, whereupon this site immediately published a post alerting to the facts of the matter. By then, in a flurry of social networking, Trettebergstuen had already moved on to Facebook where she repeated her mistaken suspicion of being targeted by “an Israeli newspaper”.

Below we see how Trettebergstuen and someone claiming to be Mads Larsen, author of the novel “Pornopung” (Shaved male genitalia)joke about the imagined “Israeli newspaper”.

Read it all. Here too. KGS UPDATE: The blogger at Norway, Israel and the Jews informs the TT that: “Trettebergstuen founded the group “Friends of Palestine” at Parliament. This woman is a member of Parliament’s Foreign Affairs Committee.”