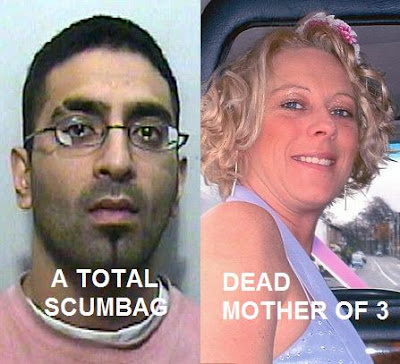 While poor Amanda Bailey eats dirt
Another member from the religion of peace plows into an infidel and gets off light, even though he shows no remorse after killing his victim. The case reminds the Tundra Tabloids of the hit and run by the rotund Lord Nazir Ahmed. He got only 12 weeks for his hit and run, and served a whopping 16 days of his sentence. The TT reminds everyone about this, just to keep it freshly in the mind of the public.This other scumbag left the scene of the crime, never looking back, leaving the poor woman to die on the street where she was creamed by Faiz’s speeding car. It wouldn’t surprise the TT if this guy walks as well, seeing that the trend nowadays in the UK is treat their Muslims to a different set of rules. A set for them and a set for everyone else, the Lord Ahmed case sets a precedent, so why shouldn’t Faiz try to use it? Car dealer was driving at twice the speed limit
when he killed mother-of-three in hit and run

A car dealer who killed a ‘hard working mother of three’ in a hit and run was branded callous and despicable by the judge who jailed him today. Atif Faiz was driving at twice the speed limit when he knocked down Amanda Bailey on a clear, cold winter night, Burnley Crown Court heard. Rafhan Sarwar, one of the three passengers, described his friend’s ‘stupid heavy driving’ as ‘red lining every gear’, prosecutor Timothy Brennand told the court.

Mr Brennand said the Astra was six seconds behind another car, and that both were going at a ‘grossly excessive speed’. He said: ‘Witnesses described the vehicles as accelerating hard. One pedestrian had to take evasive action to avoid being hit.’ Ms Bailey, 33, was crossing the street to the garage when the Astra ploughed into her at 60mph. She was hit on Leeds Road, Nelson, Lancashire, at 11.50pm on February 11 this year and died shortly afterwards.Mr Brennand said: ‘There’s some evidence the car attempted to swerve just before the incident but whatever evasive action was taken was too little, too late.’ Faiz and his companions failed to call an ambulance or stop at the scene, he said. Mr Brennand said that ‘none of them demonstrated any humanity or compassion’ and branded their flight from the scene and subsequent silence during police questioning as ‘shameful’. The court heard that passenger Mohammed Tehseen Zaman, 19, confessed to two friends that he had been involved in a hit and run. Another one of the passengers, Mohammed Zaheer Rashid, returned to the scene to find out what the police knew.Mr Brennand said the group were returning from Huddersfield, where they had bought a car for Mohammed Tehseen Zaman’s father.He said Ms Bailey, whose daughters are aged 11 months, three and 13, was well-liked.Mr Brennand said: ‘She was well known, well respected, a hard working mother-of-three.’ Faiz, who has a six-week old child, pleaded guilty to causing death by dangerous driving.The 23-year-old, of Leeds Road, Nelson, was jailed for three years. He also received a consecutive four-month sentence for assaulting a man in July last year.Zaman, also of Leeds Road, was sentenced to 16 months in a young offenders’ institution after pleading guilty to perverting the course of justice.Judge Beverley Lunt told Faiz: ‘Any human being who could treat another so callously can only be described as despicable.’She added: ‘If you have any conscience, you should be haunted every day of your life by what you have done and the hurt you have caused.’Mohammed Zaheer Rashid, 24, of Burns Street, and Rafhan Sarwar, 19, of Charles Street, both Nelson, who pleaded not guilty to causing death by dangerous driving and conspiracy to pervert the course of justice, were discharged by Judge Lunt.She told them: ‘You acted dishonourably in this case and will have to live with the shame and with everyone knowing you acted with no honour for the rest of your lives.’Ms Bailey’s mother, Joan Smith, 53, who is raising her daughter’s children, criticised the sentence.Speaking outside court, she said: ‘Three years for a life is not justice. I’m really disgusted.’I feel sorry for them (the defendants) because if I put myself in their position I think I’d be frightened and panic but I’d never have left the body in the road, I wouldn’t do that to a dog or a cat so I wouldn’t do it to a human being.’

Oh, he won’t be haunted by what he’s done, he’s already thinking of how to get out of jail quickly, and hopes that the “incident” won’t ruin his car business reputation. I mean, that’s how Lord Ahmed behaved, as he siezed the chance to get out of his measely 12 week sentence. The fat chap served only 16 days of it. No remorse there, and more than likely there will be no remorse from Faiz as well. Bank on it. KGSNOTE: Real remorse induces the perp to say how much he/she regrets doing whatever that landed them in hot water, as well as being willing to sit out the entire jail term. For many truly repentant prisoners, doing time is a cake walk compared to the guilt that follows them because of what they have done.