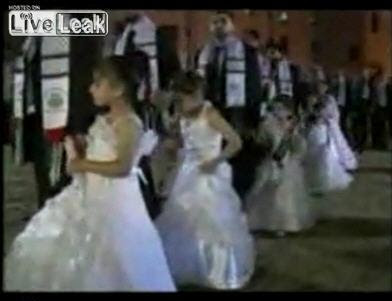 The journalist holds the keys to this storyThe blogger, Esther, from the Islam in Europe blog, notified the Tundra Tabloids that Sky News journalist, Tim Marshall has given the TT an honorable mention. Fair enough, the Tundra Tabloids pulled the story it posted concerning the video that showed Hamas members marching hand in hand with little girls on the way to being married, due to the efforts of the journalist in question who emphasized that the blogosphere had gotten it all wrong.There are still a few questions lingering about the whole affair concerning what Sky News’ Tim Marshall has said in his defense, and what has not been made available. Thus far, we have been expected to just take Marshall’s words for granted that he is honestly relaying the whole truth about what took place.

The TT has no problem with that, but it would be great to see actual pictures, or video, of the Hamas men with their wives after the marriage ceremony in order to see WHO THEY WERE. It’s not asking much to view verifiable evidence to put this story to rest once and for all. I believe that MArshall’s rush to cry “Islamophobia” was ill advised, seeing that Islamic sanctioned pedophilia is indeed a reality. An anonymous commenter points out to the TT that:

“In spite of the denials, I tend to agree that the little girls are the brides. Such marriages are quite frequent within Islam, especially in more fanatical branches where the girls are married off early to avoid the headaches of constantly protecting their virginity or allowing them to grow up and possibly to have independent thoughts and ideas. This book carries one such photo of a little “Palestinian” girl from the early 1900s, all decked out for marriage. See here lower left side:

This is the more extreme “tradition” of course, and in some Islamic nations, such as Afghanistan, they dress up little boys identically to the little girls shown in that video, subjecting them to the similar barbaric child-rape. Review the film “Osama” (not about OBL) for a reality-check. If the Islam-apologists wants to make a point about it, all they have to do is to produce a photo of all those “older brides” in the bleachers or wherever else they might have been. Shouldn’t be too difficult to come up with one photo of 450 brides.

It’s without question that Islam sanctions under age marriages with pre-pubescent girls, something of which Marshall admits: “It’s as is they really beleive that because there are examples of child brides, it means all weddings are with child brides.” As far as I could tell from the TT’s own comment box, and from the comments on blogs Marshall mentions, no one is claiming that all Islamic marriages are arranged in the same like fashion, but that it’s indeed a practice that takes place with regularity. Like I told Esther in a recent email: “The problem here is that we are all assuming….even the journie in question, from either perspective. Before I can give it a go once more…I have to be sure that it was indeed as we initially thought, that the tots were indeed marching off to their institutionalized rape.

What also angers me is that Marshall first brings the issue up, then produces nothing to back up what he says…then leaves us (the blogosphere) filling in the blanks…then raking us over the coals for ‘getting it all wrong’. It’s a small thing for me to pull the story, the bigger issue is the journalist in question not willing to produce any evidence to back up his version of the story, as well as throwing out the charge of Islamophobia.”I believe that Marshall is wrong to conclude that we in the blogosphere do not know enough about Islamic culture, if there is anyone in the West who has been immersed in the ways of the culture that drives the ME, it’s many of us who blog about the subject on a daily basis. I pose the following question to Tim Marshall: Why would you think that Hamas members, who are fanatical followers of their prophet Mohamed, who sanctioned marriage to pre-pubescent girls by his marriage to the 9 year-old Aisha, would not follow the prophet to the letter in this respect?Though the blogosphere may be wrong in its assumption over the Hamas marriage video, Marshall is equally wrong for not providing any evidence to help back up his version of what took place, as well as depicting us who followed the story, as somehow wanting to make things up due to our ….Islamophobia. In the end, Marshall helps to cut off his own legs by not providing the reader, even after the fact, a scintilla of evidence that proves us all wrong. Tim Marshall: “Perhaps I was making up the fact that the brides were elsewhere. It’s possible. But who would you believe, the reporter who went to the event, or a desperately poor version of citizen journalist, sitting at home, making things up, not checking anything, and either unknowingly or deliberately, writing hysterical anti Islamic nonsense.”There are many of us Tim, who wonder why would you label what we wrote as, hysterical anti Islamic nonsense, though such Islamic activity is part of the historical record? Why would you be willing to give genocidal maniacs the benefit of the doubt? KGSNOTE: “Being there” does not automatically prove the validity of the account, as the BLOGOSPHERE has proven time and again by holding the MSM’s feet to the flame as they have been caught with their pants down repeating Palestinian/Arab propaganda as fact. The Lebanon/Israel war in 2006 was a good example of this. So a bit less arrogance from the MSM would be a welcome step in the right direction. UPDATE: Read more about it here! Marshall never saw the adult brides!