Skip to content
Home
/
2009
/
August
/
4
/
Uncategorized
/
UK: Political Correctness Buffoonery Continues as Policewomen are Ordered to Dress Up in Burkas for ‘In Your Shoes’ Experience…….
Facebook
Twitter
Google+
LinkedIn
Pinterest
UK bending over backwards
to please its Muslims 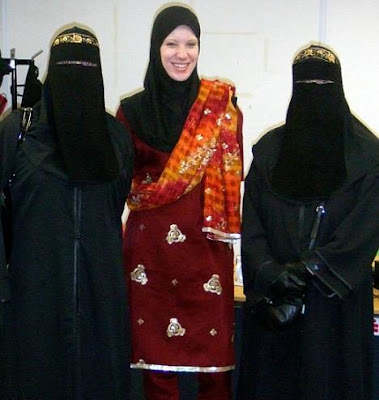 Policewomen in body bags: We would really like to tell what we think
about these bags but we want to keep our jobsThere is no end to the foolishnes. The Brits seem to be at the forefront of western societies determined to drive their society down into the pits. What would really have been a breath of fresh air, was to have heard that these women refused to dress in these body bags at all, and sued the city for wanting to force them into wearing them.So a UK police force wants their women to know what it’s like to dress up in this misogynist rag, which upon wearing automatically turns the female into a ‘walking vagina’. The rag also symbolizes a postive attitude for rape, which is used in many corners of the world as a means to get their women to cover up, as well as depicting all males as sexual deviates who need their women bagged up in order to curb their animal instincts.This is the type of nonsense these charlatans -who parade themselves as being ”open minded and tolerant”- are inflicting upon our liberal and already open minded societies. Cultural relativism is a foolish notion, and anyone, and the TT means just that, anyone who dabbles with such thinking is a fool. KGS

Three female police officers were ordered to dress up as Muslim women for the day just to see what it felt like. They wore traditional burkhas as part of a scheme designed to help police interact better with the Islamic community.Two covered their faces with hijab headscarves and niqab veils, leaving only narrow slits to see through, and another wore Muslim dress and a headscarf showing her face.Critics yesterday lined up to denounce the scheme as ‘political correctness gone mad,’ and accused South Yorkshire Police of losing sight of its main objective.

Douglas Murray, of the Centre for Social Cohesion think-tank, said: ‘You just couldn’t make it up.

‘The victims of crime must be amazed that the police have so much time on their hands that they can spend a day playing dress-up.

‘This is a complete waste of police time and taxpayers’ money. It’s not the duty of police to empathise with particular sections of the community. It is the duty of the police to prevent crime and catch criminals.

‘After this are they planning to dress as members of other communities such as Hindus and Buddhists?’

Fiona McEvoy, of the TaxPayers’ Alliance, said: ‘The police should be spending their time trying to catch criminals rather than indulging in gimmicky exercises.
‘This is political correctness gone mad – it’s ridiculous. These kinds of schemes seem to yield few measurable benefits.

‘Taxpayers would rather see the officers concentrating their efforts and resources on providing decent frontline policing, making the streets safer for every section of the community.

‘The police are overstretched as it is without officers being paid to do other things than their real job.’

The officers, Sergeant Deb Leonard, Sergeant Deb Pickering and Police Community Support Officer Helen Turner, all from Sheffield, were accompanied by four Muslim women to help them learn more about the Islamic faith on a tour of the city.