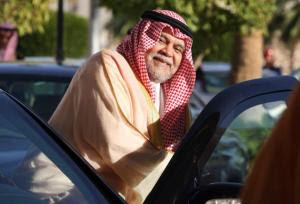 Bandar ‘Bush’ has gone missingNo idea whatsoever whether this story has any gas to it, but according to *Press TV*, Saudi Prince Bandar has gone missing and supposedly due to an intended coup against the ruling King. KGSIn kingdom, Saudi prince’s coup ‘fails’

Saudi Prince Bandar bin Sultan, the kingdom’s former ambassador to the United States, is reportedly under house arrest over a conspiracy against the monarch.

Saad al-Faqih, head of the opposition group Islamic Reform Movement, told Arab-language TV al-Alam that Prince Bandar has been disappeared and the media has published no word from the ex-diplomat’s whereabouts since nearly three months ago.

According to al-Faqih, the prince first disappeared in Britain but he returned to the kingdom shortly afterwards.

He added that after Saudi officials discovered that he had provoked 200 agents working for the Saudi security service to stage a coup against King Abdullah, he was put under house arrest.

Al-Faqih said people close to the king had disclosed Bandar’s plots and foiled them.

Power struggle between members of the Saudi royal family has been common as power is shared among some 200 princes out of the estimated 7000 family members.

Known as Bandar Bush because of his close relations with former US President George W Bush, the prince is son of Crown Prince Sultan bin Abdul Aziz.