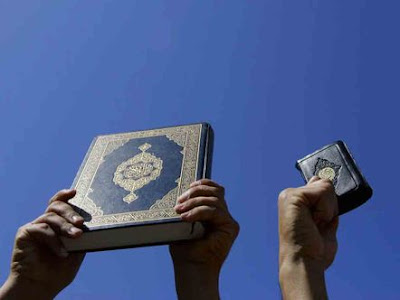 Turn the cheek? Who us?!!
That’s not the way of our prophet!

A friend once said (paraphrasing here), “a Jew needs only to look at an Arab cross eyed, to get him all lathered up into a rage“. The Tundra Tabloids also believes the same hair trigger rage-O-meter extends to the Christian community as well. All that is needed is a rumor of a rumor (like a Koran being burnt), to get the so called ‘religion of peace’ screaming down your neck in a rage, with bloodshed and burning of buildings on their hearts and minds. KGS

NOTE: What’s in question here is not even a Koran burning, but a paper from a wedding that contained a few koranic verses that, may or may not have been, misused or discarded. 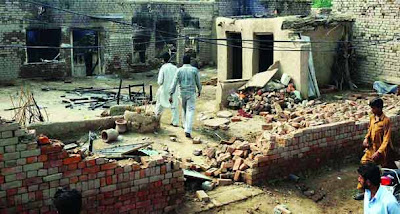 TOBA TEK SINGH: A mob burnt 75 houses of Christians over the alleged desecration of the Holy Quran in Azafi Abadi at Chak 95-JB on Gojra-Faisalabad Road, 32 kilometres from here, late on Thursday, Christian leaders said.

Christian leaders Atif Jamil Pagaan and Ashfaq Fateh told a press conference that 75 houses were burnt and two churches ransacked by the residents of a neighboring village over reports that Mukhtar Maseeh, Talib Maseeh and his son Imran Maseeh had desecrated the papers inscribed with Holy Quran verses at a wedding ceremony.

Dawn learnt from sources that 50 houses were damaged when the mob in a frenzy of rage held a jury where Talib Maseeh was asked to offer apology over the incident.

Talib, however, denied the incident and refused to offer apology. In the ensuing developments, hundreds of the people attacked Azafi Basti.

Before the arrival of the mob, the residents had fled which gave a walkover to the mob which put on fire 50 houses. The ablaze also burnt a few cattle.

The mob blocked Gojra-Faisalabad Road to block the entrance of fire brigades to the village. Federal Minister for Minorities Shahbaz Bhatti and Punjab Minorities and Human Rights Minister Kamran Michael visited the locality on Friday and urged both sides to remain peaceful.

They said the Christians would be compensated for their loss. Minority MPAs Rafiq Pervaiz and Khalil Tahir Sandhu also visited the village.

DPO Inkisar Khan said a case has been registered under section 295-B of the Pakistan Penal Code against Mukhtar Maseeh, Talib Maseeh and Imran Maseeh without any arrest.

Local ulema and traders demanded the arrest of the accused and announced a complete strike on Saturday (today). Former MNA M Hamza condemned the violence against Christians as well as the alleged desecration act. In a press statement, he demanded a judicial probe into the incident.