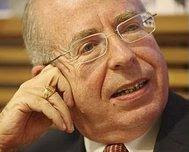 The situation in Lebanon shouldn’t be ignored

As the world thumps its chest and declares what a great institution the UN is for stopping the Lebanese-Israeli war in 2006, Iran, Syria and Hezbollah are rolling on the ground in laughter. And why shouldn’t they, they have successfully made a laughing stock (once again) of the international institution that sits on Turtle Bay in New York city.The Tundra Tabloids was highly sceptical of UNSC 1701 when it was voted on back in 2006, because it lacked the proper teeth to enforce the UNSC’s mandate which was to ensure that the Hez-Nazis are no longer armed by Iran through that weigh station called Syria.Finland chaired the EU presidency at the time, and Finnish FM, Erkki Tuomioja was rather pleased with himself for his contribution in stopping the fighting. But noticeably enough, Tuomioja, as well as the rest of the EU politicians -who were demanding an end to the fighting- lacked any kind of words of assurance to Israel that it wouldn’t be facing the very same situation in only a few years time.Welcome to 2009, with Hezbollah once again ready to ratchet up the violence once it gets the ‘go ahead’ from Iran- This time around however, Nasrallah will be taking his marching orders straight from Tehran, having learned his lesson from going solo back in 2006. And the international community (read =UN) will have itself to blame when the next round of fighting that takes place, and it will happen, and with weapons the UN said it would stop the Hezbollah from having. KGSNOTE: This op-ed first appeared in the Helsinki Swedish language newspaper, Hufvudstadsbladet, on the 25th of July 2009.Wake-up calls in Lebanon

For an international community eager to see signs of calm and progress in Lebanon, the election victory of the March 14th camp and the hints of Syrian-Lebanese diplomatic ‘normalization’ have been seized on as positive signals of hope and stability.

But the underlying reality in Lebanon is profoundly troubling and, despite the wishfulness of many international actors, is becoming increasingly hard to ignore.

Denials that Hizballah has been aggressively re-entrenching itself in southern Lebanon, which had already been sounding feeble and unconvincing, were dealt a further blow on July 14, when a series of explosions ripped through a Hizballah weapons cache in Khirbat Salim, a Shiite village South of the Litani River.

Under UN Security Council resolution 1701, which put in place the cease fire arrangements following the Israeli withdrawal in 2006, southern Lebanon is to be free of all weapons other than those of the Lebanese Armed Forces and UNIFIL troops. Yet when UNIFIL inspectors arrived to investigation the explosions, they were barred entry by LAF soldiers until Hizballah could remove the evidence of their presence.

What Hizballah was unable to remove, however, was the sense of betrayal and frustration felt by the Lebanese residents if Khirbat Salim. In an open letter to the President of Lebanon (Al-Mustaqbal, 16/7) they declared: “The explosion of the arms depot in our town… exposes to the air of the world that which everyone is trying to obscure, to blur and ignore, and that is the illegal weaponry and its storage in our areas and our children’s basements.” Turning to Hizballah, the residents wrote: “We have had enough of the pains and disasters of the ‘victory’ of 2006! If you, as you claim, relate your activities to religion and to Allah, then you must empty the residential areas of weapons and ammunitions and of everything that poses a menace to our lives.”

All indications are that the quantity of weapons smuggled into Lebanon through the Syrian-Lebanese border has not only replenished Hizballah arsenal, but significantly increased it. In an interview to the Financial Times, Hizballah Deputy Secretary General Sheikh Naim Qassem, refused to confirm “but would not deny…that we have three or four times the arsenal we had in 2006”.

Along with Hizballah’s increased weaponry comes increased bravado. Just three days after the arms cache explosions, a group of Hizballah sympathizers led by MP Qassem Hashem of the Shiite Movement Amal, crossed the Blue Line into Israel, to plant Hizballah flags on the Israeli side of the border. Hashem added to the spirit of incendiary recklessness in an interview to Lebanese television (ANB, 18/7) in which he ominously averred that the incident was “just a warning” and vowed that “an important step would be taken” within a week.

The tools for addressing the growing Hizballah threat and ensuring the stability of Lebanon’s are already in place. Not only did the Security Council in resolution 1701 set out clear principles for the disarmament of all armed groups in Lebanon and the securing of its borders against the smuggling of weapons, but it also created a reinforced UNIFIL force, numbering 12,000 highly professional troops to implement its arrangements on the ground. To date, however, UNIFIL has been prevented from acting to the full extent of its mandate, with the inevitable result that Hizballah has grown in both strength and daring.

There is little appetite in the international community for addressing Hizballah’s increasingly overt provocations, and for taking a firmer stand against its backers, Syria and Iran. But as events this past week have made abundantly clear, Hizballah is back as a force to be reckoned with – one that would be perilous to ignore.