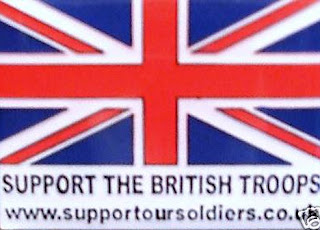 Offensive by whom I ask?If there are people living within the UK who deem the wearing of the Union Jack (in suport of their troops in Afghanistan) to be ‘offensive’, why in the world are they living in the UK in the first place? Just thought I’d ask, in spite of the danger of someone deeming it racist and all. KGSH/T: GaiaBanned, the police Union Flag badge that backs our troops

Scores of Scotland Yard officers are in open revolt after being banned from wearing Union Flag badges in support of British troops.

Met chiefs have decreed that the tiny emblems – which cost £1 with proceeds going to charity – must be removed after a complaint that they are offensive.

But furious junior officers are continuing to wear them in defiance at the politically correct stance.
A petition has been launched on the Downing Street website demanding they be allowed to wear the badges, which are to raise funds for the Royal British Legion and the Help for Heroes charity.

Peter Smyth, chairman of the Metropolitan Police Federation, said: ‘The decision to forbid police officers from joining the rest of the country in showing support for those who are fighting for their country is nothing less than shameful.’

The row started when 200 officers at Heathrow Airport were barred from wearing the badges last month on the grounds that they were in breach of the Met’s strict dress code.
The order is thought to have followed a complaint from a member of public that the symbol is ‘offensive’.

But about 70 officers, many of whom have been in the Services or have relatives fighting in Afghanistan, have ignored the directive despite warnings of disciplinary action.

NOTE: But wearing gay pride badges on the British police uniform is ok.