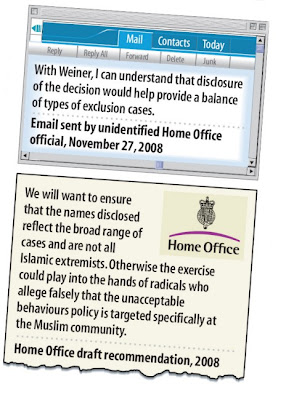 UK Home Office: Can’t have too many Muslims on the list
The decision to ban Michael (Weiner) Savage from the UK was of politics, pure and simple. The Tundra Tabloids can imagine the UK Home Office’s decision making process after it made up its list of Muslim fundamentalists to ban. It more than likely sent out enquiries to the US government and/or to private individuals to suggest names of Jewish Americans to include on the list.The UK Home Office hadn’t a clue about Savage until his name was delivered to them, most likely from someone who didn’t care for his views on a range of subjects. Never mind the fact that the man had NEVER called for any violence towards anyone, his political views were enough to do him in, as well as his being a Jew. The Tundra Tabloids has said before that while it can’t agree with 100% of what Savage says, it most certainly supports his right to hold views not deemed politically correct. When we start banning people we do not agree with, except for those who promote violence towards others or work to undermine our way of life, we destroy the fabric of our free societies.The TT believes that Michael Savage’s case against Jacqui Smith has now been strengthened. The UK Home Office should have concentrated their efforts on really protecting UK citizens, this whole episode shows the dangers of holding politically correct views that run counter to common sense and sound rational thinking. KGS
US shock jock Savage targeted
‘to balance least wanted list’

Former Home Secretary Jacqui Smith has suffered a major setback in her legal battle with American ‘shock jock’ Michael Savage after her officials were accused of banning him from the country on racial grounds.

Emails written by Home Office officials privately acknowledged the ban on Mr Savage would provide ‘balance’ to a list dominated by Muslims – and linked the decision to Gordon Brown and Foreign Secretary David Miliband.

The officials admitted their action could look ‘duplicitous’ and cited his ‘homophobia’ as a reason the move would receive public support.

The Right-wing radio presenter, whose hardline views on Islam, rape and autism have caused outrage in the US but whose show, The Savage Nation, has eight million listeners, was identified in May by Ms Smith as one of 16 people barred due to their political views.

Enlarge Mr Savage, who had not even applied for entry to Britain, claimed his name had been ‘plucked out of a hat’ because he was ‘controversial and white’. He has since served a £100,000 libel writ on Ms Smith, who announced his ban on television.

Now, correspondence released under Freedom of Information legislation suggests the banning of Mr Savage, whose real name is Michael Weiner, was based on a party political calculation made at the highest level of Government.

One message, sent by an unidentified Home Office official on November 27 last year, said that ‘with Weiner, I can understand that disclosure of the decision would help provide a balance of types of exclusion cases’.

The documents include a draft recommendation, marked ‘Restricted’, saying: ‘We will want to ensure that the names disclosed reflect the broad range of cases and are not all Islamic extremists.’