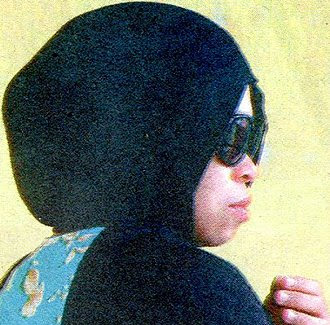 Kartika Sari Dewi Shukarno:
“it was sheer bad luck”
It was sheer bad luck that your country was over run by Islam, Shukarno, the only sanity holding that country together are the non-Muslim Chinese and Indian minorities, and how long they can hold off their own Islamization is still a question mark. KGS
H/T: Baron Bodissey
Malaysia to cane beer-drinking Muslim model

A Singaporean Muslim model who drank beer at a nightclub in Malaysia will be caned, press reports said Tuedsay.A Malaysian religious court sentenced the tearful 22-year-old Kartika Sari Dewi Shukarno to six strokes of the cane after she pleaded guilty to consuming alcohol, the English-language New Straits Times newspaper reported.

“We feel the sentence is fair after going through the prosecution’s argument and since the rotan (cane) is provided for in the law,” Pahang Sharia High Court judge Abdul Rahman Yunus said, according to the paper.

“The rotan is aimed at making the accused repent and serves as a lesson to Muslims,” he added, also fining Kartika 5,000 ringgit ($1,412).

The part-time model said she would appeal the sentence.

She was with her Singaporean husband in a hotel nightclub in the eastern state of Pahang last year when syariah officers raided the lounge, nabbing 20 other Muslims for drinking alcohol, which is forbidden in Islam. Her husband was let off, according to an earlier report in the Times.

She told the newspaper before the trial that “it was sheer bad luck” the lounge was raided.

Kartika is not the first woman to be caned for drinking alcohol. In January, the same court sentenced a Muslim waitress to six cane strokes in what was believed to be the first such sentence for a woman.

The Muslim-majority Malaysia has a two-track legal system and its non-Muslim Indian and Chinese minorities are permitted to drink alcohol. Civil courts operate alongside state-based sharia courts, which are based on Islamic law, that can try Muslims for religious offences.