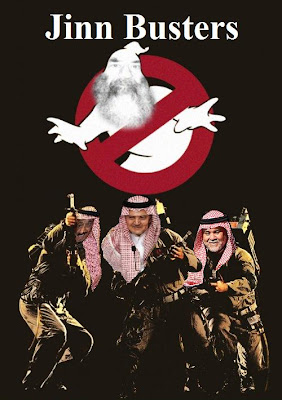 The best and brightest of Saudi law

Yes, there are exorcisms in Christian theology, but they take place within a private setting, never within a court of law. The backwardness of the House of Saud has never been as transparent as it is now. KGS

A family in Saudi Arabia is taking a genie to court for theft and harassment.

The genie is accused of leaving them threatening voicemails, stealing their mobile phones and hurling rocks at them when they leave their house at night, according to the Al-Watan newspaper.

An investigation was under way, officials at the Shariah court said.

‘We have to verify the truthfulness of this case despite the difficulty of doing so,’ Sheikh Amr Al Salmi, the head of the court, told Al-Watan.

‘What makes this case and complaint more interesting is that it wasn’t filed by just one person. Every member of the family is part of this case.’

The family has lived in the same house near the holy city of Medina for 15 years, but only became aware of the spirit in the past two years.

‘We began hearing strange noises,’ the head of the family told Al-Watan.

‘In the beginning, we didn’t take it seriously, but after that, stranger things started happening and the children got really scared when the genie began throwing stones.’

A charity has moved the family to a temporary residence while a court investigates, the newspaper said.

In Islamic cultures, a belief in genies, or jinns, is common. Genies not only appear in pre-Islamic fiction such as ‘Arabian Nights,’ but are also mentioned in the Quran.

Many Saudis believe invisible genies live among them and are capable of demonic possession and revenge.

In Islamic theology jinn are said to be creatures with free will, made from ‘smokeless fire’ by Allah in the same way humans were made of earth.

According to the Koran, Djinn have free will, and Iblis used this freedom in front of Allah by refusing to bow to Adam when Allah told Iblis to do so.

By disobeying Allah, he was thrown out of Paradise and called ‘Shaitan’.