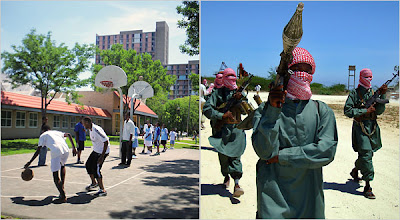 Once content in playing basketball,
now living it up with jihad in SomaliaOnce they were lost, but now they have found themselves. Jihad offers the former “peaceful” dormant Jihadi Somali men a way out of their dilemma, of being safe and secure in the US, but in violation of their Koranic duties in Somalia. The promise of a secured afterlife by the Koran through joining the Jihad, is too much of a lure or “golden brass ring” for some of these Muslims, who by all accounts, lived very successful lives in America.We have had similar situations here in Finland, in Sweden, and in the UK. The reasons are pretty much the same, Jihad offers a licence to go to war for whatever reasons they may have, but it also affords them with the assurance that, they and their families will receive an automatic ticket to paradise due to their efforts in pursing the jihad as devout Muslims. KGS
A Call to Jihad From Somalia, Answered in America

…For a group of students who often met at the school, on the University of Minnesota campus, those words seemed especially fitting. They had fled Somalia as small boys, escaping a catastrophic civil war. They came of age as refugees in Minneapolis, embracing basketball and the prom, hip-hop and the Mall of America. By the time they reached college, their dreams seemed within grasp: one planned to become a doctor; another, an entrepreneur.

But last year, in a study room on the first floor of Carlson, the men turned their energies to a different enterprise.

“Why are we sitting around in America, doing nothing for our people?” one of the men, Mohamoud Hassan, a skinny 23-year-old engineering major, pressed his friends.

In November, Mr. Hassan and two other students dropped out of college and left for Somalia, the homeland they barely knew. Word soon spread that they had joined the Shabaab, a militant Islamist group aligned with Al Qaeda that is fighting to overthrow the fragile Somali government.

The students are among more than 20 young Americans who are the focus of what may be the most significant domestic terrorism investigation since Sept. 11. One of the men, Shirwa Ahmed, blew himself up in Somalia in October, becoming the first known American suicide bomber. The director of the Federal Bureau of Investigation, Robert M. Mueller, has said Mr. Ahmed was “radicalized in his hometown in Minnesota.”

An examination by The New York Times, based on interviews with close friends and relatives of the men, law enforcement officials and lawyers, as well as access to live phone calls and Facebook messages between the men and their friends in the United States, reveals how a far-flung jihadist movement found a foothold in America’s heartland.

The men appear to have been motivated by a complex mix of politics and faith, and their communications show how some are trying to recruit other young Americans to their cause.