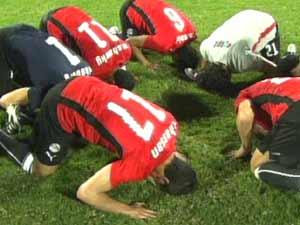 Everything’s ok if your head
touches the turf to Allah the moon god
I am reminded of an incident in which Israel took out a few rocket launchers in a Gazan football field, and FIFA howled up a storm. Now they take aim at Brazilians stating a prayer on the pitch, while turning a blind eye to what Egyptian players did after they beat Italy last month. If they have rules that restrict open displays of religion on the playing field, then it has to be enforced across the board. But let’s face facts, the FIFA is more than likely chicken sh*t to make a fuss over Muslim players breaking the rules.

PRAYING FORBIDDEN (ONLY FOR CHRISTIANS)

FIFA, the world-wide soccer administration, has sent an “official admonishment” to the Brazilian Federation whose soccer players, at their victorious final in the recent Confederations Cup in South Africa, thanked God with a collective prayer in the middle of the field. An explicitly Christian prayer, to be sure, seeing that it is the common faith in Brasil. The FIFA censorship is that religion must be separated from soccer. This does not seem to us to be an insignificant event. However, little mention of it has been made in the media. We may be wrong, but we only saw it mentioned yesterday in the Corriere della Sera and La Repubblica. The article in the Corriere was unexceptionable. The one in La Repubblica, however, made us jump up from the chair. The author, in fact, soon after describing the rite enacted by the Brazilian players, and after having pointed out that many wore “T-shirts a’ la Kakà , i.e. (“I belong to Jesus”), commented: “if this had been Muslim prayers, the sky would have opened. Instead the matter has hardly been mentioned”. It is indeed extraordinary the distortion of the facts and the truth. Here, it must be said that exactly the opposite is true to that reported by La Repubblica. The sky has opened against the Christian prayer of the Brazilians; while nobody, especially FIFA, has said a word about a similar manifestation, which was also transmitted worldwide, a few days earlier. This was the prayers of the muslim players after their win against Italy in the middle of the field facing Mecca as per their tradition. La Repubblica wants us to believe – in spite of the admonishment of the Fifa – that the Christian prayer of the Brazilians goes unnoticed, while a hypothetical prayer Muslim (…)Translation by Gaia