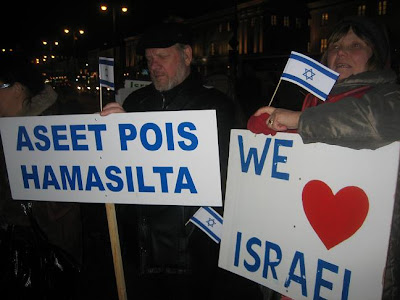 The media coverage of the Middle East conflict in Finland is pretty much the same as in other EU-countries, grossly ignorant of the real causes behind it, (Arab/Muslim rejectionism of a Jewish state) and overtly biased towards Israel. At times, the level of anti-Israel hostility in the Finnish media approaches outright anti-Semitism, but it hasn’t had too much of an effect upon the average Finn.
The fact is, there is a strong grassroots support for Israel that defies the medias’ worst attempts at maligning the Jewish state, even its politicians, like former FM, Erkki Tuomioja, who compared Israel with the anti-Jewish policies of the German National Socialists, twice, as well as the Finnish Greens party that compared an Israeli flag with the Nazi symbol, still, most Finns are not anti-Israel.
During the military operations in Lebanon and Gaza, Finnish supporters of Israel arranged huge rallies, with over 2000 people participating. It’s the equivalent of 100 000 people marching through the streets of Washington DC. A Tundra Tabloids source offers the following observation, concerning the impact of the two massive pro-Israel rallies:

“First reaction – small but aggressive demonstrations with a few hundred, mostly immigrants and left wingers. Second reaction ( in both cases ) a large ( several thousand ) peaceful rally in support of Israel in Helsinki, I attended both. After these pro-Israel rallies there were no more anti-Israeli demonstrations in Helsinki. This is unique in a European perspective. Once simple explanation is of course the small Muslim population in Finland but it does not explain everything.”

Finland is far from perfect, but it’s by no means like Sweden or Norway, and one reason why that’s the case, is that Finland sees in Israel, a similar state fighting a larger oppressive foe, the Arab nation. Finland’s own recent history with the now defunct Soviet Union during WWII, is viewed in much of the same light as what Israel has experienced over the last 60 years. 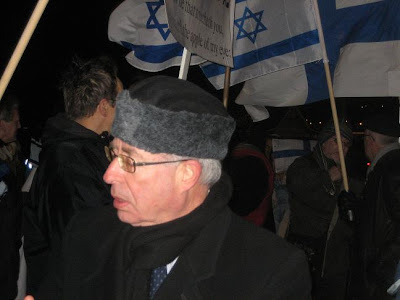 Another aspect why Finland is not anti-Israel, is the fact that it has a much smaller Muslim (read= imported anti-Semitism) community, which results in a noticeable lack of intimidation towards pro-Israel supporters. The last pro-Israel rally in January of this year, was honored with the presence of Israel’s Ambassador to Finland, Avi Granot. Such a thing could never have occurred in Sweden or in Norway, never. KGS
H/T: Barry Rubin
A place where Israel is loved

Tucked away in a far corner of northern Europe, the tranquil and resourceful nation of Finland often gets unjustly overlooked. Flanked by a swaggering and increasingly quarrelsome Russia to the east and its larger and blonder Swedish neighbor to the west, the Finns seem to receive neither the attention nor the consideration that they rightly deserve.

Indeed, despite being beset by harsh winters and a dearth of arable land, as well as enjoying the dubious distinction of being the European Union’s most sparsely populated country, Finland has nonetheless built one of the most pleasant and peaceful societies on the entire continent.

There is little crime and virtually no political corruption, and public places are spotlessly clean, bordering on the pristine. It is akin in many ways to Switzerland, except that the Finns are nice.

But there is something else that distinguishes Finland, setting it apart from much of the rest of contemporary Europe, and that is the deep-seated love and admiration for Israel that exists among large sectors of the public.

On a recent trip to the country, which included a lecture tour in six towns and cities, I found what can only be described as a remarkable level of support for the Jewish state, one that cuts across religious and regional boundaries. From the capital of Helsinki to Tampere, Finland’s third largest city, to the small town of Ikaalinen in the western part of the country, hundreds of non-Jews in each locale came out to demonstrate their solidarity.

There are churches where the Israeli flag is proudly displayed side-by-side with the Finnish national colors, and where entire Christian congregations recite “Hatikva” first in Hebrew and then in Finnish.

Remember to read it all. KGS