Skip to content
Home
/
2009
/
June
/
29
/
Uncategorized
/
Fakestinian PM Salam Fayyad Has Nothing to Offer the Israelis…….
Facebook
Twitter
Google+
LinkedIn
Pinterest
The PM the world loves to love
believes in being as vague as possible 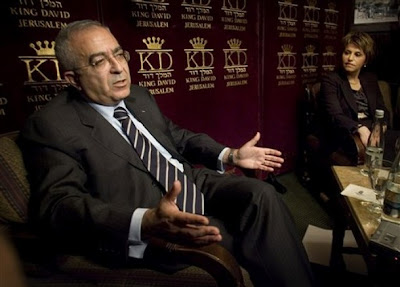 Salam Fayyad: The Israeli narrative does not
prevent a two- state solution, our narrative however, does. The Fakestinian Arabs do not believe in being totally honest about their intentions, hence the lack of interest in stating their goals and demands in order to end the conflict. But lets not kid ourselves, it’s a war that the Arabs are content to wage against Israel until it finally capitulates to foreign pressure, and only then they’ll announce what those demands will be.Barry Rubin has an excellent article about the Arabs’ “blue smoke and mirrors approach” that surrounds their demands for ending the conflict once and for all. Regardless of what US president Barack Obama wants for the region, the Arabs in Gaza and in the Disputed Territories are in no mood for settling the conflict with Israel. Regardless of their power struggle, (between Hamas and Fattah) presently, they would rather make peace between themselves than with Israel.That reality is apparently lost on B.Hussein Obama, who believes that he alone holds the keys to ending the conflict between the Arabs and Israel, a conflict by the way, in which one side, Israel, has no interest in continuing.
Palestinian Authority Prime Minister Salam Fayyad’s Response:
A Narrative He Dares Not Speak

While presenting his speech partly as a response to Netanyahu, Fayyad confronts none of the Israeli leader’s points, merely dismissing his position as a vague, which it certainly wasn’t.” (Ironically, in contrast to most Western observers, Fayyad acknowledges that Netanyahu endorsed a two-state solution six years ago).

But it’s Fayyad who is vague—Netanyahu gives a list of specific Israeli conditions; Fayyad does nothing of the kind. In fact, he does something peculiar. According to him, Netanyahu is presenting an “Israeli narrative” about the conflict, while Palestinians say they have their own “narrative,” but Fayyad says he won’t talk about it!

Why is he so vague rather than giving his own case? Because he cannot do so. The Israeli narrative as laid out by Netanyahu is clear: Jews want and merit a state; the conflict is due to an Arab refusal to accept that state’s existence. This Israeli narrative does not prevent a two- state solution, one state for each people.

The Palestinian narrative, to this day, is that Jews have no such right to a state and that all the land is rightly Palestinian, Arab, and (for most) Muslim. This Palestinian narrative does prevent a two-state solution, and its continuity–even reinforcement by Hamas most of all but also by the PA–is the cause for the peace process’s failure and the fact that it will continue to fail.

That is what Fayyad cannot admit. Indeed, the main Palestinian strategy debate is merely about the most effective way of wiping Israel off the map.

He does claim that Palestinians’ “main aspiration” is to have their own homeland, which he promises will live in peace, cooperation, and respect with its neighbor. But he cannot say it would resettle all Palestinian refugees within its borders, won’t bring in foreign troops, will end the conflict permanently, or will provide Israel with security guarantees. It will certainly never recognize Israel as a Jewish state even while the PA’s own constitution defines Palestine as an Arab and Muslim state.

Fayyad might prefer such an outcome, but that’s not the Palestinian position and he knows it.