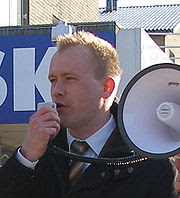 Jakob Hougaard:
Hear ye hear ye, We will enforce multiculturalism
even if it means impaling our society upon a minaret

Islamic fundamentalist Prime Minister, Tayyip Erdogan, once quoted Turkish nationalist hero, Ziya Gokalp, stating that: “The mosques are our barracks, the minarets are our spears, their domes are our helmets and the faithful are our army. In spite of what the “faithful” state about their faith, Copenhagen’s City Hall intends to play Russian roulette with the future of Denmark’s capital city. Stupid is as stupid does. KGS

The decades-long debate about the construction of a mosque in Copenhagen has taken another step forward after the city council appointed the Muslim Council of Denmark as the official partner in the project.

The council is an independent umbrella organisation representing 13 different Muslim organisations and up to 35,000 members, and will be responsible for the financing and operation of the new mosque.

They will work together on the project with the Bach Group, which purchased the ground’s location in 2005 and will be responsible for the building project.

There are currently more than 50 local prayer rooms and Islamic centres nationwide, but no purpose built mosque.

Plans were initially proposed to build the country’s first major mosque back in the 1970s by ambassadors from Muslim countries looking for a common prayer location.

Despite protests in the form of a 6,000 signature petition and threats made against a Copenhagen architecture firm that had drawn up designs for the mosque, the city council approved a district plan for a mosque location on Amager in 1992.

Jakob Hougaard, deputy mayor for employment and integration, said that the news was an important step in the future of Copenhagen as a multicultural city.

‘It’s important that Copenhagen is sending a political signal to the world that we are pleased to be multicultural and anyone is welcome, no matter what their religious background is,’ said Hougaard to Berlingske Tidende newspaper. ‘This is especially important in the wake of the cartoon crisis.